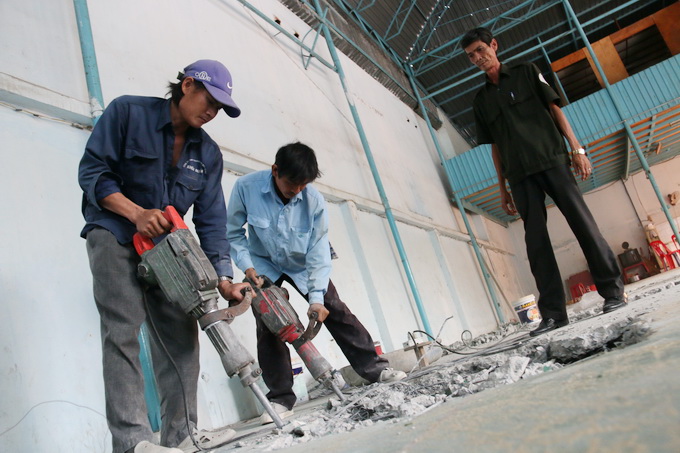 Ten compulsory drug detoxification centers in Ho Chi Minh City are ready to receive and handle addicts, as the National Assembly (NA) has adopted a resolution to allow drug addicts to be sent to the facilities pending court judgments.

With a majority voting (280/286 deputies), the NA on Monday passed a resolution to allow local authorities nationwide to set up obligatory drug detoxification centers for homeless drug addicts.  These centers will help stop drug addicts' rush on the spot, offer them preliminary detoxification, and provide them with psychological consultancy, pending orders issued by courts to officially admit them to rehab centers. Ho Chi Minh City had proposed that the NA adopt such a resolution to help restrain the rising number of drug addicts and ease public concerns about their appearance in public places. Pursuant to the Law on the Handling of Administrative Violations, which took effect on January 1, 2014, addicts can be sent to a drug detoxification facility only when a court judgment is issued for this purpose and when they fail to stay sober after being monitored for three to six months by local authorities. In practice, such regulations are unfeasible, as most drug addicts are homeless so they cannot be put under supervision, relevant agencies said. The regulations have made it hard to send addicts to rehab centers for compulsory detoxification, they said. As a result, only 33 drug addicts were admitted to such facilities in 10 provinces and cities in the nine months after the implementation of the law, said Minister of Labor, War Invalids, and Social Affairs Pham Thi Hai Chuyen at an NA meeting on October 29. In a report delivered to the NA the same day, Minister Chuyen also said the number of drug addicts in Vietnam increases by 7,000 every year, and the figure stood at over 200,000 as of the end of September.

According to the process, drug addicts will first be gathered at a center for classification before being sent to two other centers, which will temporarily stop drug addicts’ rush on the spot and offer them preliminary detoxification.

The two centers are the Nhi Xuan Vocational Training and Job Creation Center in Hoc Mon District and the Binh Trieu Rehabilitation Center in Thu Duc District. Drug addicts will later be sent to one of ten compulsory drug detoxification centers, including one located in HCM City’s Cu Chi District, four in Binh Phuoc Province, two in Binh Duong Province, and one each in Dong Nai, Lam Dong and Dak Nong provinces. Tran Huu Tham, deputy director of the Nhi Xuan Vocational Training and Job Creation Center, told Tuoi Tre on Monday that the center had nearly completed preparations to receive drug addicts. “We have already made a plan to handle drug addicts and prepared all facilities and the workforce necessary for the work,” Tham said. He added that the center has 21 health workers including four doctors. At the Binh Trieu Rehabilitation Center, Le Ba Hoang, its acting director, also said preparations have been completed to receive about 400-500 drug addicts. Tran Trung Dung, director of the HCM City Department of Labor, War Invalids and Social Affairs, said the city’s centers can accommodate about 33,000 drug addicts. Meanwhile, Ung Thi Xuan Huong, chief judge of the HCMC City People’s Court, said that the court has trained its staff in examining the records of drug addicts and making administrative decisions on sending them to compulsory drug detoxification centers.