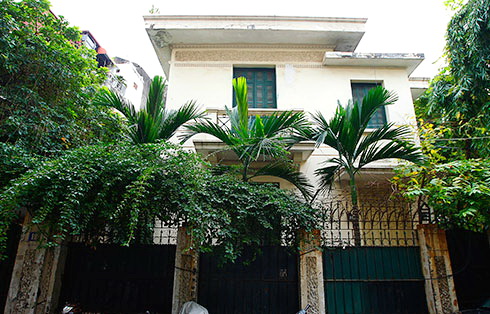 The People’s Committee of Hanoi has affirmed that they will continue inspections of unlawful appropriation of State-owned houses and will strictly handle wrongdoers, even applying criminal investigations on them.

>> Gov’t-granted house of ex-inspector chief to be withdrawn next week The statement was made by deputy chairman of the committee Vu Hong Khanh at a meeting of the capital city’s People’s Council on Tuesday. At the meeting many delegates questioned the leaders of the city about the management and inspection of 312 State-owned villas in the city. “An inspection of these villas began in August this year. Four months have passed since then, but there has been no report on the inspection results. Why?” Nguyen Xuan Dien, deputy chief of the Secretariat of the People’s Council, asked. Another delegate, Nguyen Hoai Nam, head of the Legislation Board of the People’s Council, pointed out that a number of people have illegally occupied State-owned and wondered, “Have the leaders of the city known about that?”     He also cited inspectors who said they have been facing difficulties in accessing documents and materials related to the villas. Nam then asked, “What are such difficulties?” In reply, Khanh admitted there have been shortcomings in management over such villas and that inspectors will make conclusions about this matter. Regarding whether any officials have taken advantage of their positions and power to unlawfully use State-owned villas as their own, Khanh said, “We have asked inspectors to pay special attention to this issue. It is our point of view to clarify the responsibilities of any individuals and organizations involved.” He stressed: “If there are signs of criminal offenses in any cases, they will be transferred to investigation agencies.”Villa of ex-chairman of Hanoi to be taken back Regarding the State-owned villa at 12 Nguyen Che Nghia, which has been leased to a former chairman of Hanoi People’s Committee, Hoang Van Nghien, since 2002, the chairman of the People’s Committee, Nguyen The Thao, said the authorities will withdraw the villa and will have a public notice about this. Asked by Tuoi Tre whether the withdrawal will be carried out within 2015 amid public concern that it could take longer, Thao said, “The withdrawal of the villa will be conducted in the near future, not in 2015.” Regarding this matter, the Hanoi Transport Department said it is being handled directly by a deputy director of the agency.VietNamNet, a news website, citing Mrs. Nguyen Thi Dich, the head of the quarter where the villa is located, said Hoang Huu Nam, Hoang Van Nghien’s son, is residing in the villa while Nghien is living elsewhere. Nghien was the chairman of the Hanoi People’s Committee from 1994 to 2004. Two years after retired, in 2006, Nghien applied to buy the house, but Hanoi authorities did not sell it to him. However, Nghien has yet to return the house to the State.