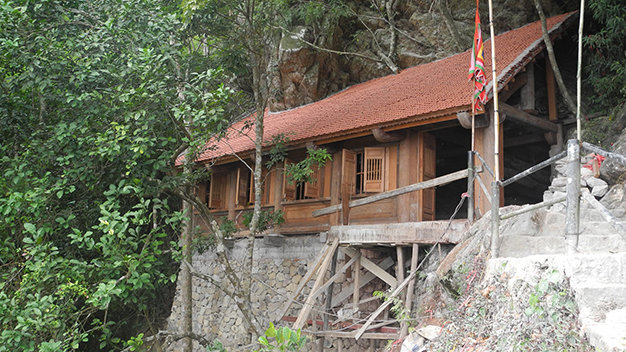 The relic preservation authorities in northern Quang Ninh Province on Friday suspended part of the restoration work on one of the country’s Buddhism hubs for undue intrusion on the time-honored structures.

According to Dao Le Trung, chief inspector of the provincial Department of Culture, Sports and Tourism, the province has decided to suspend revamp work on Duoc (Medicine) Shrine following a close inspection.

The shrine is a significant structure of the Yen Tu Relic Complex, over 125 kilometers from Hanoi.

The inspection revealed the construction unit’s numerous shortcomings, including exceeding the approved area of the shrine’s foundation, failing to comply with regulations on relic restoration and treat its treasured antiques and structures with due respect.

According to Tuoi Tre (Youth)’s investigation, the provincial Management Board of Quang Ninh’s Key Relics gave its nod to a project to restore the Yen Tu relic complex’s Duoc Shrine and Mot Mai (Single Roof) Pagoda in 2012.

The Duoc Shrine, which nestles on the Thanh Long mountain range, was erected by King Tran Nhan Tong (1258 – 1308)- one of the country’s most revered kings for his compassion and leadership skills.

The third king of the Tran Dynasty (1226–1400), the king ruled for 15 years before giving up his throne and retreating to Yen Tu, where he lived a monk’s secluded life.

Duoc Shrine was where Sir Dieu Ngu grew his herbs to concoct traditional medicine and cure local residents and clergy of their illnesses.

Ho Chi Duc, head of the provincial Management Board of Quang Ninh’s Key Relics, said the restoration work began some one month ago.

“The construction unit should have informed relevant agencies as soon as they noticed the shrine’s foundation has seriously sunk, instead of replacing the old foundation made from a special kind of brick with a concrete new one without seeking permission,” Duc explained.

As Tuoi Tre observed on Thursday, the century-old stone slabs with intricate carvings were scattered messily all over the place, which is also muddled with construction materials.

The construction workers admitted they have no training or experience whatsoever in restoring relics.

Trung, chief inspector of the provincial culture department, said restoration work on the shrine can resume only when a new permit is granted, and the Yen Tu complex’s management and the construction unit make sure the age-old structures and antiques are properly preserved.

Restoration of the pagoda

As Tuoi Tre observed, restoration work on Mot Mai Pagoda- another of the Yen Tu complex’s  key structures- does not fare any better than that on Duoc Shrine.

The pagoda, which is also home to the sect’s archives and teachings records, is the only one in the Yen Tu complex that boasts all white-stone Buddhist statues.

According to the pagoda’s head nun Thich Nu Dieu Nuong, Mot Mai pagoda was rebuilt over 30 years ago.

Its wooden walls and roof have sustained irreversible damage and thus badly need repairs, she added.

Nguyen Trung Hai, head of the Yen Tu Relic Complex and National Forest’s management, told Tuoi Tre on Thursday that most of the structures at the pagoda and Duoc Shrine have seen dilapidation, and require radical revamp by demolishing the time-honored items.

Duoc Shrine’s foundation was also turned up by antique thieves, further sinking it seriously, he noted.

He and his two successors built hundreds of pagodas and shrines throughout the Yen Tu Complex, including famous ones, which boast thousands of prized statues and artifacts.

The complex is also home to Yen Tu Festival, one of the country’s major springtime events, which typically runs from the 10th of the first month until the end of the third month in the Lunar calendar.