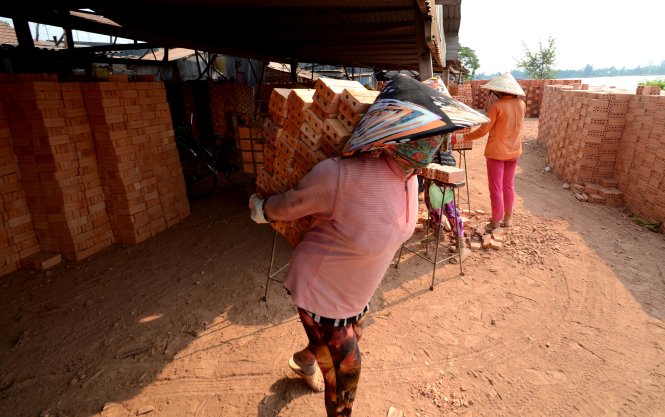 A photo essay by a Tuoi Tre (Youth) newspaper reporter shows images of hard-working women carrying hundreds of bricks every day in the southern Vietnamese province of An Giang.

Hundreds of women who work at brick factories in Nhon My and My Hoi Dong Communes in the province have to deal with a hard workload every day, just as men do.

Each woman carries around 50 to 60 bricks on their back from the production area ashore to a boat for sale. They have to walk on a small, wooden walkway with the scorching sun overhead.

As the job is not stable, these workers are also unable to have a long-term financial plan.

Some women at the brick factories have worked since they were young.

Truong Thi Huong, 46, has spent 25 years carrying bricks. Huong said she will continue this job until she is unable to work anymore.

A worker is seen carrying heavy bricks on her back. Photo: Tuoi Tre

They help each other to move and carry bricks. Photo: Tuoi Tre

Workers are shown carrying bricks to the boat under the scorching sun. Photo: Tuoi Tre

The workers have to move on a small, wooden walkway. Photo: Tuoi Tre