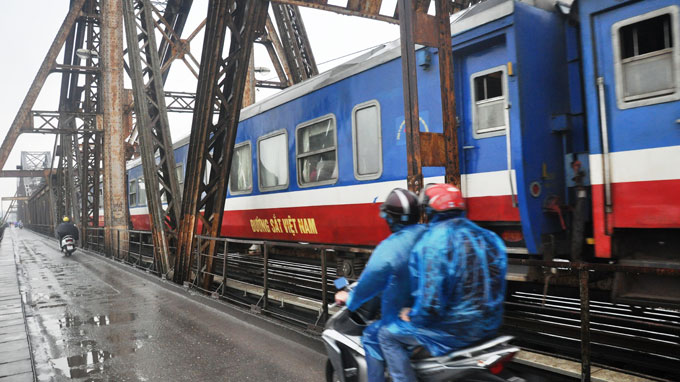 Japan has requested that Vietnam refund the total amount disbursed for a consulting contract for a Japanese ODA-funded railway project in Hanoi marred by a US$780,000 bribery scandal uncovered last year.

Japan has requested that Vietnam refund the total amount disbursed for a consulting contract for a Japanese ODA-funded railway project in Hanoi marred by a US$780,000 bribery scandal uncovered last year.   The request was announced by Yamamoto Kenichi, deputy representative of the Japan International Cooperation Agency (JICA) in Vietnam, at an annual press conference on Wednesday. While answering questions from reporters about the scandal, related to the railway line No. 1 (the Yen Vien-Ngoc Hoi route) of the Hanoi urban railway project, Kenichi said the Japanese government demanded Vietnam return the monetary aid Tokyo had disbursed for the consulting contract for the line.Tien Phong (Vanguard) newspaper cited the Vietnamese Ministry of Transport as saying on Thursday that the technical consultancy for the railway line has been completed and the project has received two loans worth of ¥21.271 billion ($177.8 million) in total from the JICA. The railway line has been the subject of an allegation by Japan’s media that a Japanese firm – Japan Transportation Consultants, Inc. (JTC) – paid over $780,000 in Vietnam to win an order for this ODA project worth more than $41 million. The JICA official, however, said the organization will continue to provide support for the project. “We will continue providing capital for the project. The bribery related to the Japanese ODA-funded Hanoi urban railway project is true. However, in our view, the fault lies with those who gave and took the bribe, not the project itself,” Kenichi said. He added that the JICA is coordinating with Japanese agencies and Vietnam’s Ministries of Finance, and Planning and Investment to set up an independent supervisory mechanism for this project.    The above scandal was uncovered on March 21, 2014 when Japan’s Yomiuri Shimbun newspaper reported that Tamio Kakinuma, JTC’s president, admitted his company had paid ¥80 million (then $782,640) in kickbacks in return for an ODA project order worth ¥4.2 billion (then $41,088,600) in Vietnam. That bribe was paid in 2008-2012, according to Vietnam’s Nguoi Lao Dong (Laborer) newspaper. Yomiuri Shimbun also said that JTC allegedly bribed civil servants in Vietnam, Indonesia, and Uzbekistan with ¥130 million (then $1,271,790) from February 2008 to February 2014 in order to receive orders for five Japanese ODA-funded projects in these countries. In early May 2014, six Vietnamese railway officials, including Tran Quoc Dong, deputy general director of the state-owned Vietnam Railways Corporation (VRC), were arrested for their involvement in the alleged bribery scandal. Dong has been charged with “negligence of responsibility, causing serious consequences” under Article 285 of the Penal Code, while the other five were detained on charges of “abusing positions and/or powers while performing official duties” pursuant to Article 281 of the Penal Code.

This scandal is the second case involving Japanese ODA-funded projects in Vietnam. The first was discovered in 2008 regarding the East-West Avenue project in Ho Chi Minh City, JICA chief representative in Vietnam Mori Mutsuya was quoted by Nguoi Lao Dong as saying. The JICA leader warned that if the third such graft case happens in Vietnam, then Japanese people will request the government to stop granting ODA to the country, according to Nguoi Lao Dong. However, as Japan always considers Vietnam one of its most important partners, the East Asian country will still supply the Southeast Asian nation with ODA grants totaling ¥165.6 billion ($1.38 billion) in the fiscal year 2015, equivalent to that in 2013, the JICA chief said.