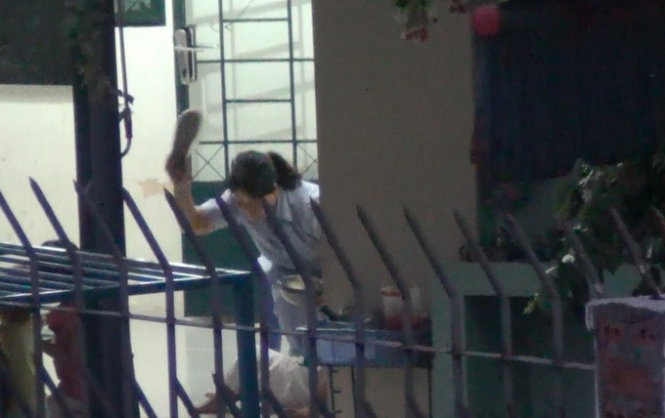 Some nannies at a children care center in Ho Chi Minh City have been found by Tuoi Tre (Youth) newspaper reporters hitting kids living with HIV with their bare hands, slippers, and legs during meals.

Those with HIV/AIDS, who are frail and can be infected with opportunistic ailments induced by the human immunodeficiency virus, are in bad need of better care, sympathy, and love.

However, a number of adults fail to do so.

A Tuoi Tre investigation, which was conducted for over one month, disclosed that some caretakers beat kids every day at the Kindergarten Department of the Linh Xuan HIV/AIDS Care and Support Center, which is located in Thu Duc District, Ho Chi Minh City.      Founded in 2010, the center operates under the city’s Department of Labor, War Invalids, and Social Affairs.

The Kindergarten Department is currently home to over 20 kids with HIV, aged three to six, and older kids with mental disabilities.

Among them, two eight-year-old girls named C.T. and M. are blind, frail, and sickly, according to the Tuoi Tre probe.

While C.T. can crawl on the floor, M. cannot move on her own.

The two girls are generally seated while they are being fed.

A still image taken from a Tuoi Tre video clip shows a nanny, who works at the Kindergarten Department of the Linh Xuan HIV/AIDS Care and Support Center, located in Thu Duc District, Ho Chi Minh City, beating a young kid with HIV with her hand.

As the boy would not swallow the spoonful of food, C. slapped him on the face and threatened to smack him more.

She then gave the sobbing child two more slaps, leaving him crying even louder and screaming with terror.

C. then hit another little boy with her hands before turning to C.T. and M., the two blind, hardly mobile eight-year-olds.

As C.T. could barely gulp down the spoonful of porridge, C. smacked her on the head before forcing another boy to stand while eating as a penalty. Around the same time, another nanny named Q. was feeding T., aged around three, while the little girl was sitting on the floor.

Q. yelled loudly and hit the girl on the head with her hands, sending T. to collapse on the floor and sob even louder.

The nanny mercilessly struck the girl with a slipper four times. The screeching child was on the point of running off when the woman managed to hold him back and pinched her down with her hands and feet.

As T. was struggling to get out from her pincer grip, the woman gave her some other smacks before jerking the little girl’s arms hard several times.

Q. suddenly let go of T., causing her to fall to the ground.

A still image taken from a Tuoi Tre video clip shows another nanny, who works at the Kindergarten Department of the Linh Xuan HIV/AIDS Care and Support Center, located in Thu Duc District, Ho Chi Minh City, pinching the ear of an HIV-positive boy.

During the process, L. summoned a little boy and pinched him in the ear, before smacking M., who was sitting nearby, on the cheek.

As C.T. could not swallow her spoonful of porridge, the girl got hit by L. on the forehead.

The nanny was seen continually stuffing M.’s mouth with porridge.

To give them drinks, L. pushed the two girls’ heads backward and pouring water into their mouths.

On January 24 morning, while Q., the said nanny, was feeding a little girl, T., the three-year-old girl, knocked down a plastic chair.

The nursemaid instantly got up and kicked T.’s body twice.

By the end of breakfast the same morning, L. kicked C.T., the blind, hardly immobile girl, all the way from the dining area into another room.

On February 3 morning, a little guy was about to stand up in tears from his breakfast when he was slapped on the face by D., another of the center’s nannies.

B., another caretaker, coerced T. to stand on a chair before hitting her in the buttocks.

As T. was trying to get down from the chair, the woman forced her to continue standing on the chair and managed to hit her more with her slippers.

On February 26 afternoon, as T. was sitting on a chair, a caretaker named H. hit her several times on the leg and scared her by purposefully shaking the chair.

H. also thumped another boy on the head while he was eating and even hit him with T.’s hand.

During breakfast time on March 4, as T.T., another caretaker, was spoon-feeding several kids, she relentlessly yelled at, poked fingers at, pinched, and smacked the older children who were eating on their own.

A still image taken from a video clip created by Tuoi Tre reporters displays a nanny hitting an HIV-infected child on the forehead while she is feeding the child.

She then pulled a boy up from the table, and pinched his ear though he showed no sign of disobedience.

A piece of dumpling was then stuffed into the mouth of the sobbing child who was pulled away with his ear pinched.

No complaint lodged about kid beatings

According to Doctor Dao Thi Hue, vice director of the Linh Xuan HIV/AIDS Care and Support Center, the facility is currently home to 120 kids.

Among them, 22 are being cared for at the Kindergarten Department by 15 nannies.

Doctor Hue stressed that it is quite a challenge to look after kids with HIV, who tend to be sicklier and frailer than their healthy peers.

The facility has yet to receive any complaints about its nannies hitting the kids.

“Based on Tuoi Tre’s tip-off, our directorate will look closely into the cases and penalize the perpetrators, if any,” the doctor pledged.