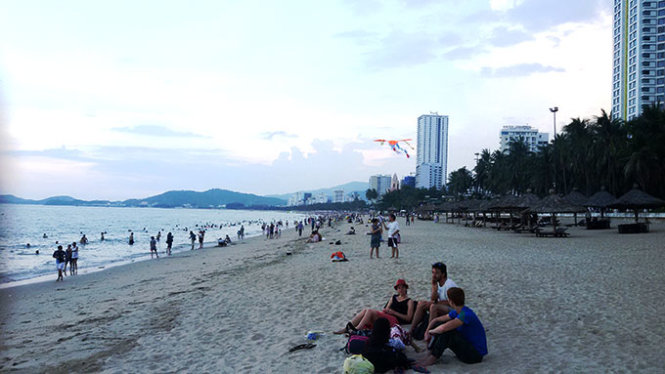 Vietnam’s Nha Trang to have beach zoned for night swimming

A company in the south-central province of Khanh Hoa has received the green light from local authorities to earmark part of the beach in the provincial capital of Nha Trang for tourists and locals to swim at night.

Swimming after 6:00 pm is normally not advisable at beaches across Vietnam for safety reasons, as no lifeguards work that late to protect beachgoers.

TD JSC, which proposed opening a night swimming beach in front of the 32-34 Tran Phu Hotel, thus said it will set up a lighting system and arrange lifeboats and lifeguard forces to ensure safety.

The night swimming zone extends around 50m from the shore and lies within the area where the hotel is allowed to put its beach umbrellas and benches, according to the proposition.

The Khanh Hoa administration worked with relevant agencies on the proposal during a meeting on Monday, and eventually decided to give TD Co. the go-ahead.

“The night swimming zone will be open on a trial basis this month, after which we will review its effectiveness,” Le Huy Toan, deputy chairman of Nha Trang, said after the meeting.

“The company must install the lighting system and assign lifeguards to ensure safety for beachgoers.”

The 32-34 Tran Phu Hotel is located on Tran Phu, the main street of the famed resort city, fronting a beach area that is meant for public use.

“The [TD] company wants to open the night swimming section only to increase the value added for the hotel, rather than blocking the beach for its own use,” Bui Xuan Luong, an official from the Khanh Hoa Department of Culture, Sports and Tourism, said.

“The night beach is admission-free and serves both locals and tourists.”

The Khanh Hoa administration thus backed the proposal and hailed the firm’s plan to serve the community with the night swimming zone.

In December 2014, the management board of Nha Trang Bay also proposed zoning a beach area near the city’s 2/4 Square for night swimming.

The area was suggested to run around 200m along the beach, from Nha Trang’s iconic Tram Huong Tower to Nguyen Thi Minh Khai Street.

The Nha Trang Bay management board has recommended that the night swimming area be funded by the Khanh Hoa budget.

“It will be great if there is another night swimming beach in Nha Trang, besides that of TD Co., as tourists and local residents will be better served,” said Luong, the official from the tourism department.