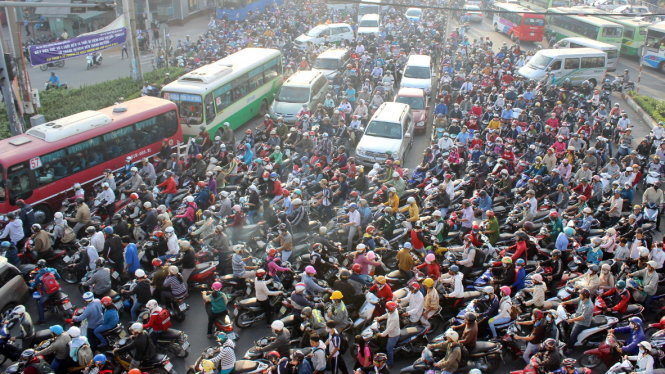 Traffic jam in Vietnam different from that the world over: officials

The definition of traffic jam devised by authorities in Vietnam is not agreed on by the public and it is certainly not found anywhere else in the world.

Why? Only Vietnamese officials can give the reply, but the people guess that the new definition is mainly intended to reduce the number of congestion cases in their reports.

According to traffic police and the Committee for Traffic Safety in Ho Chi Minh City, the city had only one case of traffic congestion in 2014 and none in the first seven months of this year.

Reported to the People’s Committee by the traffic safety committee, it is clearly not representative of reality, at least in the eyes of regular people and foreign tourists who call the metropolis “the kingdom of motorbikes.”

But why is there that difference?

A traffic jam is only reported by authorities when vehicles are kept motionless on streets for at least 30 consecutive minutes, officials claimed.

Bui Xuan Cuong, director of the municipal Department of Transport, said the criterion was approved by the Ministry of Transport long ago and it should be modified to suit the current situation.

Minh said that in his knowledge, streets and crossroads are generally categorized into different levels of service.

Level A means vehicles can run smoothly without any obstruction by others while level B has more vehicles, and it gradates down to the worst level F.

Levels E and F are considered traffic congestion, he said.

Thus, the definition that “vehicles kept motionless on streets for 30 consecutive minutes” is inaccurate.

Vo Van Ba, a resident of Binh Tan District, called on authorities to stop their “play on words” to evade the increasing traffic jam situation in Ho Chi Minh City.

The traffic safety committee admitted the definition of traffic congestion has not been clearly mentioned in any documents and thus there is difference in the perception between people and officials.

Lieutenant Colonel Huynh Trung Phong, vice head of the local traffic police department, said that the average speed of vehicles running on streets in the city has been slower in recent years.