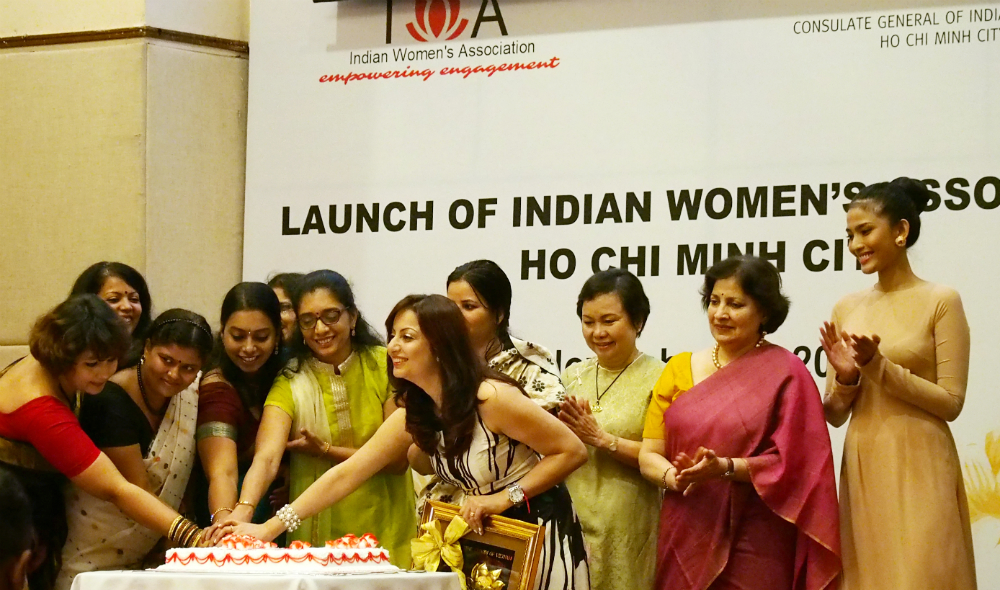 Preeti Saran, Indian Ambassador to Vietnam, talked to Tuoi Tre News in an exclusive interview on the occasion of the launch of the Indian Women Association (IWA) in Ho Chi Minh City on Saturday.

As we know, the foreign minister of India, you – the ambassador of India to Vietnam, and the consul general of India in Ho Chi Minh City are all women. What would you like to say about the empowerment of women in modern India?

Women in high positions can be found in many places across India, both in government as well as in the private sector. But the empowerment of Indian women is not new, as it began over 30 years ago with Indira Gandhi, the first female prime minister of India, at a time when only a small number of countries had women as leaders.

In fact India has a tradition of women holding top positions, and now the country has several female ambassadors. The speaker of the parliament is also a woman, and so are many ministers in Prime Minister Narendra Modi’s cabinet.

Indian women also hold very high positions in the private sector, including banking, with many women working as CEOs. The head of the biggest state-run bank in India is a woman while the top positions of three other major Indian private banks are held by women. And we also have many other dynamic female entrepreneurs.

This is a tribute to the dynamism of Indian women and the opportunities the country provides for them to assume those top positions. In Indian constitutions, all are equal including in opportunities and rights, which enables women to access high-quality education and become qualified before excelling in all fields.

On the occasion of the launch of the IWA in Ho Chi Minh City, can you give us more detail on the purpose and missions of the association?

The Indian Women Association in Ho Chi Minh City is established to act as a bridge of friendship between Indian and Vietnamese women, as the southern city is home to a large and dynamic Indian community, a large share of which consists of highly-educated and well-qualified Indian women with strong entrepreneurial spirits.

The establishment of the IWA takes place at a time when the members of our Indian community are playing an increasingly important role in forging people-to-people links and bilateral relationships.

The association can help bolster this bilateral friendship by using their capabilities in doing social work, holding English classes, organizing training workshops where they can share their skills and knowledge in many fields like information technology, trading, yoga, traditional systems of Indian medicine, and fitness on a voluntary basis.

While a large part of the world is battling recession, both India and Vietnam are considered bright spots with dynamic economies that are estimated to grow, a large part of which is due to the greater participation of women in the economy. That has led to enhanced economic and social development in either of the countries.

There are strong complementarities between our two countries and we can learn a lot by exchanging ideas, so the IWA will provide a useful platform for Indian women to constructively engage with their Vietnamese friends.

Can we have your thoughts on Vietnamese women?

I’m very impressed by Vietnamese women, and just like Indian women, they are dynamic, intelligent and powerful, especially in running businesses and political institutions.

They are good at multitasking - fantastic homemakers who take care of their families very well and perform surprisingly well at work.

I’m never failed to be impressed by how wonderful, skillful and beautiful the Vietnamese women I meet every day are.

Vietnamese women are doing exceedingly well, and are capable of doing better, if provided with equal opportunities and treatment in both public life and businesses.

There is somewhat of a “glass ceiling” that women cannot break alone, which is also true for other parts of the world.

What are the similarities between Indian and Vietnamese women in your opinion?

They have many things in common, primarily because both India and Vietnam are traditional societies in which the place of women as homemakers is very important.

Both India and Vietnam pay great attention to family values and traditions, which makes the role of the homemakers indispensable in both societies.

Given that background, if the same women are empowered with modern education to obtain new skills, they will contribute more to both their family and workplace.

What do you think can be the areas of cooperation between Indian and Vietnamese women?

They can cooperate in many sectors, especially in specific fields that are friendlier to women or in which women often have a dominant role like fashion, fashion technology, wellness and such fitness-related areas as traditional medicine, yoga training and education.

I am confident that greater engagement between the women of our two countries will help promote the three C’s: Culture, Commerce and Connectivity.