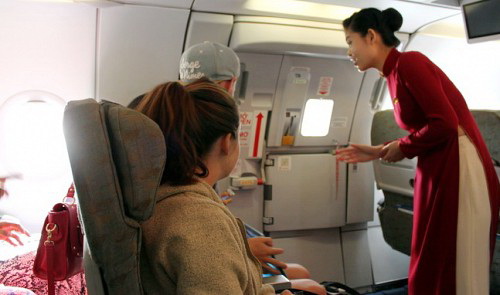 A Vietnamese passenger aboard a local airline’s flight has been required to pay a civil fine of VND2 million (US$89.6) for using emergency equipment on the plane without the permission of the flight attendants.

The Northern Airport Authority on Monday slapped such a penalty on Nguyen Trung D. for taking out a life jacket without the consent of the cabin crew on board a plane bound for Ho Chi Minh City from the north-central city of Vinh on July 14.

The passenger was found violating regulations on using emergency/lifesaving equipment in civil aviation.

The flight crew then reported the issue to the Northern Airport Authority for handling.

In 2015, a Japanese national was caught smoking in the restroom on a flight of national carrier Vietnam Airlines from Japan’s Nagoya to Tan Son Nhat International Airport in Ho Chi Minh City. He was then fined $185.

In April 2014, the NAA also fined a Vietnamese passenger VND10 million ($470) for opening an emergency exit “for more fresh air” while he was on board a Vietnam Airlines airplane that was about to take off from Hanoi’s Noi Bai International Airport to the Central Highlands city of Pleiku.