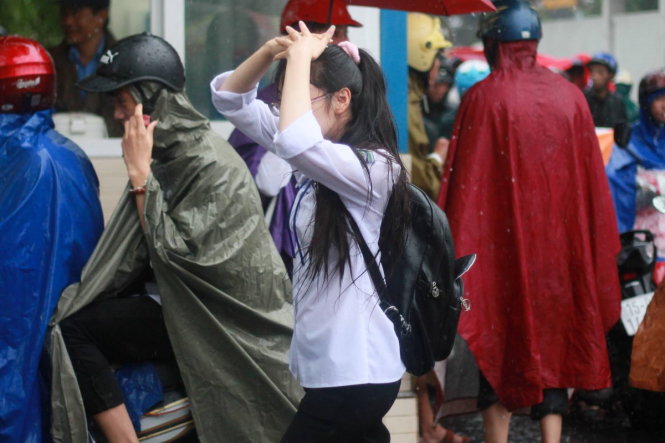 A trough that formed south of the East Vietnam Sea on Monday is expected to bring heavy rain to northern Vietnam, and lashing squalls to the south.

Accompanied by the Intertropical Convergence Zone, the trough is set to bring squally rains in southern maritime areas between Binh Thuan and Ca Mau provinces on Tuesday, with waves as high as three meters, the National Center of Hydro-Meteorological Forecasting (NCHMF) has said.

High winds at 5-8 on the Beaufort scale are also predicted for the region, the forecast center said.

In the meantime, downpours of between 30-50 millimeters were seen in northern mountainous provinces on Monday afternoon, with the water level expected to reach as high as 70 millimeters, creating a high chance of landslides and flash foods, especially in Lao Cai, Yen Bai, and Ha Giang provinces.

Last week, Vietnam’s northern region was overwhelmed by the storm Dianmu, the third to hit the country this year, which made its landfall in Hai Phong City at 2:00 pm on Friday.

The tempest, dissipating on the same day, has killed seven people, injured eight, and left two unaccounted for, according to the Department of Natural Disaster Prevention and Control’s brief report on Sunday.

The cyclone also knocked down 89 houses, lifted roofs of 659 residences, and submerged 1,303 dwellings in water.

The storm also inflicted severe damage to 10,755 hectares of rice and 2,629 hectares of vegetables, while uprooting 607 trees across the region. Over 3,000 livestock were lost due to the phenomenon.