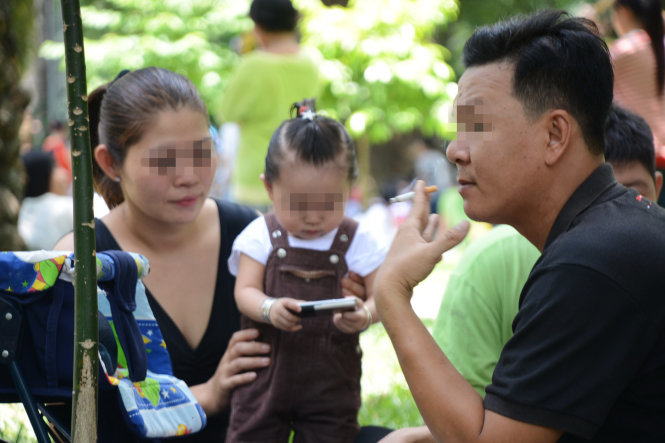 Despite a law banning public smoking since 2013, smokers in Vietnam have shown been unwilling to obey the regulation.

Many are seen smoking while driving, in hospitals, on buses, and even when there are children around.

According to the regulations on preventing smoking’s harmful effects, which was brought into law on May 2013, smoking is completely banned indoors and in outdoor places concerning health and education and in places with a high risk of fire.

Most workplaces, colleges and public spaces have also prohibited smoking indoors and the regulation completely bans smoking on public transportation.

The same fine will be applied to anyone smoking under the age of 18.

However, the fines seem not to worry most smokers.

Tuong Vi, student from the Ho Chi Minh City University of Agriculture and Forestry expressed her dismay at seeing many people, including drivers, smoking on buses without drawing any comments from other passengers.

“This happens often on long-haul bus journeys,” she said. “I can do nothing but put my mask on.”

“The smell is overwhelming.”

Meanwhile, Tuan Hung, from Ho Chi Minh City’s District 12 said that one of his worst nightmares is breathing other peoples smoke while stopped at a red light.

“My child has to suffer the same thing when I drive him to school,” he expressed with anger.

Children are the victim of passive smoking from adults around them. Photo: Tuoi Tre

Lawyer Tran Ngoc Quy from Ho Chi Minh City Bar Association said that the implementation of the non-smoking regulations has not been thorough enough.

The appropriate agencies seem not to really care about giving out penalty’s or are busy focusing on something more important, the lawyer said.

“Smoking has been considered a widespread habit and actually no one has been seen receiving fines for smoking,” he added.

Meanwhile, Pham Thi Hoang Anh, Vietnam director of Ohio-based non-profit organization HealthBridge Canada said one of the obstacles to smoking regulation enforcement is the awareness of the law, especially by the leaders of organizations and agencies.

“Why do some areas enforce the law very well and the others not?” she stressed. “It’s not about the regulation, it’s about the awareness of leaders.”

According to her, the law gives People’s Committees, police and health inspectors the authority and responsibility to handle smoking violations, but they do not have the manpower to inspect those who violate.

Moreover, they also do not enforce strict penalty’s on violators.

“If people violate once and receive no sanction, they will continue,” she said.

Another issue that Anh pointed out is unequal treatment, as those in authority are often ignored when they violate non-smoking laws.

“The law must be implemented fairly on everyone, to make it strict and effective,” she added.