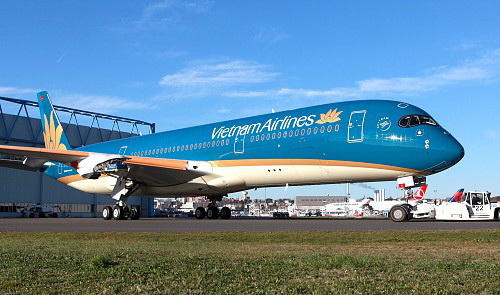 More than 30 Japanese students had to be admitted to hospital over food poisoning shortly after their arrival from Ho Chi Minh City on a Vietnam Airlines flight on Friday, but the in-flight meals could be ruled out as cause of the illness.

The Vietnamese national flag carrier confirmed later the same day that 34 Japanese passengers, all high school students, were rushed to hospital with ill stomach upon landing in Tokyo-based Narita airport.

As of Friday noon, 33 of the students had been discharged, Vietnam Airlines announced on its verified Facebook page.

The carrier said it is working with airport authorities to verify the cause of the poisoning. The Boeing 787 that carried the Japanese students along with more than 300 passengers to Narita has also been inspected and eventually allowed to resume service normally.

On Friday afternoon, Lai Xuan Thanh, head of the Civil Aviation Authority of Vietnam, said the food poisoning victims are members of a delegation of 263 students and teachers of several Japanese high schools.

Shortly after boarding, two of the students started to suffer stomachache and diarrhea. The symptom then spread to 34 of the students, with 18 of them also suffering vomiting and fever.

The medic team on board the plane had actively assisted the victims, Thanh said.

According to newswire VnExpress, a representative of the Japanese delegation confirmed in the written record of the case that the students had yet to use the in-flight meals when they began showing sign of food poisoning.

Prior to their flight, the students had dinner at a hotel in Ho Chi Minh City, according to the record.

“We think the passengers might have been poisoned by the food at that hotel,” Thanh said. “All of the meals served aboard the flight were normal, as was the aircraft itself.”

The official added that the Japanese side has yet to release any official conclusion about the case to Vietnam Airlines.