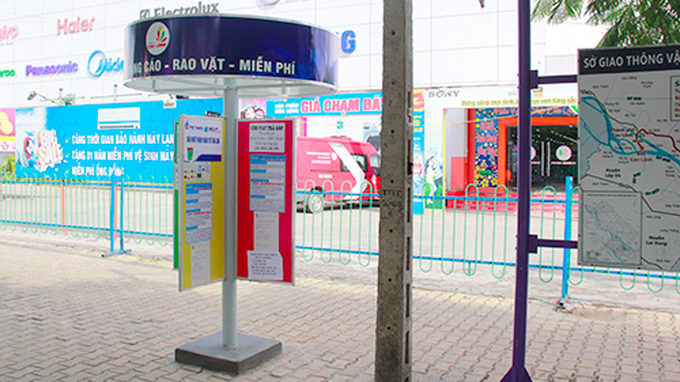 Public bulletin poles where ads and flyers can be posted for free are part of the new initiative by the administration of Cao Lanh City in the Mekong Delta province of Dong Thap to combat the disorderly posting of advertising materials.

Poles and large notice boards will be erected in easily visible locations to allow local businesses and residents to post flyers, advertisements, and notices free of charge, according to Phan Van Thuong, chairman of the Cao Lanh People's Committee.

All residents will be allowed to post and no prior approval from authorities will be needed to use the poles, Thuong added.

Two bulletin poles have already been installed in the city and plans are in place to build ten more at popular locations in order to meet the local demand, the city chairman said.

Disorderly flyer posting has been an issue in Vietnamese cities, most notably in metropolises such as Ho Chi Minh City and Hanoi, where most lamp posts and power poles are filled with leaflets advertising tutoring services, rooms for rent, and houses for sale.

Cao Lanh City has been running a campaign since the beginning of this year to solve the issue by calling numbers listed in the flyers and asking those responsible to remove their materials.

“Those who deliberately continue to illegally post after being warned will be subject to administrative penalties,” said Nguyen Ha Khanh, head of Cao Lanh’s urban order division.