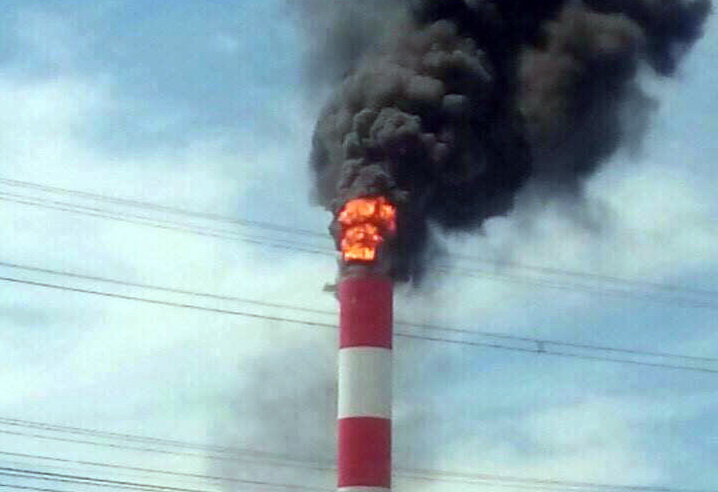 A huge explosion was followed by large pillars of smoke coming from a thermal power plant in south-central Vietnam on Tuesday, during a trial run on one of the facility’s turbines.

Fire and plumes of black smoke were seen coming from one chimney at the facility, with workers rushing from the plant in fear of their lives, according to eyewitnesses.

By 11:40 am, an official from the Vinh Tam Electricity Center confirmed that an explosion had occurred during the test run of the turbine, and that there was no serious damage.

Several workers did suffer burns, with the two most serious taken to the hospital by noon.

The workers, Tran Kim Hoan, 40, and Tran Quy Trai, 20, suffered burns on 30 to 35 percent of their bodies, mostly on their faces, backs and arms, according to doctors.

The Vinh Tan 4 is operated by Electricity Vietnam Group (EVN), a state-run firm managed by the Ministry of Industry and Trade.

The US$1.61 billion project turned its first sod in March 2014, with two turbines producing a combined capacity of 1,200MW. The first turbine, tested on Tuesday, was expected to be commissioned by December 2017.

The trade ministry said in an announcement later on Tuesday, citing a report from the EVN, that the incident at the thermal power plant had been a fire, not an explosion as the media had reported.

EVN said welders had been working on the flue-gas desulfurization (FGD) inside the plant when sparks ignited the insulation material inside.

The trade ministry said it would send a team of officials and experts to examine the plant on Wednesday.