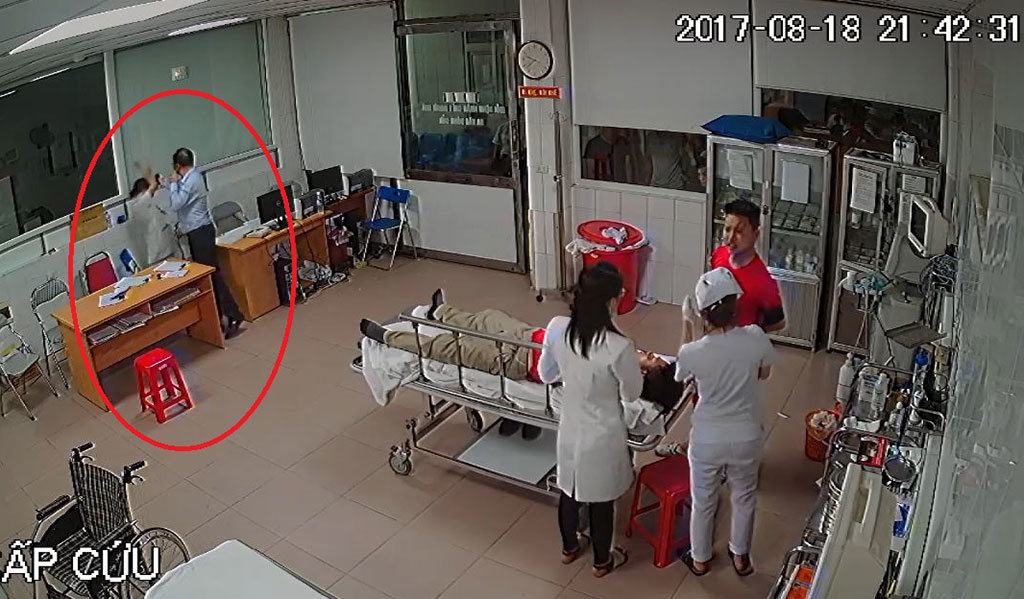 The director of a company in the north-central Vietnamese province of Nghe An has expressed his regret and apologized after footage of him slapping a female doctor went viral on social media.

The clip showing his violent actions at the Nghe An 115 General Hospital has sparked outrage after being uploaded to the Internet on Monday.

Relevant authorities later identified the attacker as Nguyen Dinh Hoang Thang, chairman of the management board and director of Tan Thang Construction JSC based in Vinh City, Nghe An.

Thang admitted on Tuesday he was the man in the video footage.

The company director recalled arriving at the infirmary on the night of August 18 after being told that Nguyen Van Nam, 26, Thang’s employee and also nephew of Nguyen Xuan Huan, chairman of the administration in Trung Do Ward, Vinh City, had been hospitalized following a road accident.

Believing that doctors and nurses at the facility weren’t paying enough attention to Nam, who was bleeding severely, Thang became upset and later attacked one of the doctors.

“I lost control. I was wrong and am deeply sorry for and ashamed of my behavior. I take full responsibility for my actions,” he said.

Thang added that Chairman Huan was also at the hospital during the incident and tried to stop the violence.

According to Dr. Hoang Thi Minh, the victim, doctors at the hospital had examined and evaluated Nam’s condition.

“As we were about to take the patient for a CT scan of his fractured cheekbone, a man yelled at me and started slapping me,” Minh recounted. “My face was aching and swollen the next morning.”

Pham Van Dung, deputy director of the Nghe An 115 General Hospital, said that a report had been submitted to the provincial Department of Health, requesting that relevant authorities solve the case and ensure the safety of doctors and nurses at the infirmary.

Chairman Huan has also written a report to the Vinh City Party Committee, confirming that he had not taken part in the assault.

“I was just trying to stop the fight and ensure order at the hospital,” the official said.

After the video was posted, several media outlets claimed that Huan was also an attacker given that the clip includes footage of him grabbing a stool and heading toward the room where Dr.Minh had returned to after being slapped by Thang.