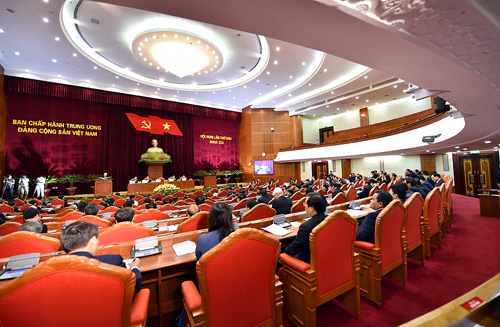 -- Nguyen Phu Trong, Secretary General of the Communist Party of Vietnam, underlined the need to streamline the apparatus of the country’s political system to improve its efficiency during his remarks at the opening of the 12th Party Central Committee’s sixth plenary session in Hanoi on Wednesday.

-- Vietnam’s National Center for Hydrometeorology and Forecast has warned of landslide and flash flood risks in mountainous areas of the provinces from Thanh Hoa to Quang Binh in north-central Vietnam due to heavy rains.

-- An eco-tourism company in south-central Nha Trang City in Khanh Hoa Province has been found to encroach on a large swathe of sea on the city’s Hon Rua (Turtle Island), the director of the provincial Department of Natural Resources and Environment said on Wednesday.

-- Hundreds of cabbies in Hanoi have put stickers on the back of their vehicles to demonstrate their objection to a decision by Vietnam’s Ministry of Transport to allow cab-hailing apps Uber and Grab to be piloted in the city.

-- The merchants who were last week found to inject thousands of pigs with a sedative at a major slaughterhouse in Ho Chi Minh City will have to pay nearly VND4.5 billion (US$198,000) to have the animals incinerated, according to a source of Tuoi Tre (Youth) newspaper.

-- Multiple banks in Vietnam are putting their debtors’ collateral up for auction to recover bad debt, following the state-owned Vietnam Asset Management Company’s move to seize the under-construction Saigon One Tower in downtown Ho Chi Minh City as its developer fails to pay debts.

-- Around 4.2 million foreign tourists visited Ho Chi Minh City in the first nine months of 2017, bringing VND84 trillion ($3.7 billion) in revenue to the city’s tourism industry, according to Bui Ta Hoang Vu, director of the municipal Department of Tourism.

-- Vietnam Airlines has promised to provide Vietjet and Jetstar with backup pilots to help the carriers maintain their flight schedules, following a recent series of flight cancelations as pilots of the low-cost airlines reportedly took concurrent sick leaves.

-- The Wake-Up instant coffee line by Vietnamese producer Vinacafé has been recalled by its distributor in the U.S. due to a lack of dairy content warnings on the product’s packaging, according to an announcement on the website of the U.S. Food and Drug Administration.

-- A four-day food festival featuring dishes from around the world will take place at the Hoa Lu Stadium in District 1, Ho Chi Minh City, from Thursday with the participation of hundreds of Vietnamese and international culinary businesses.

-- Vietnam’s Ministry of Culture, Sports and Tourism has yet to determine whether the 2021 Southeast Asian Games (SEA Games 31) will be hosted by Hanoi or Ho Chi Minh City, with less than three months from the end of 2017, when it has to submit a hosting plan to the central government for approval.