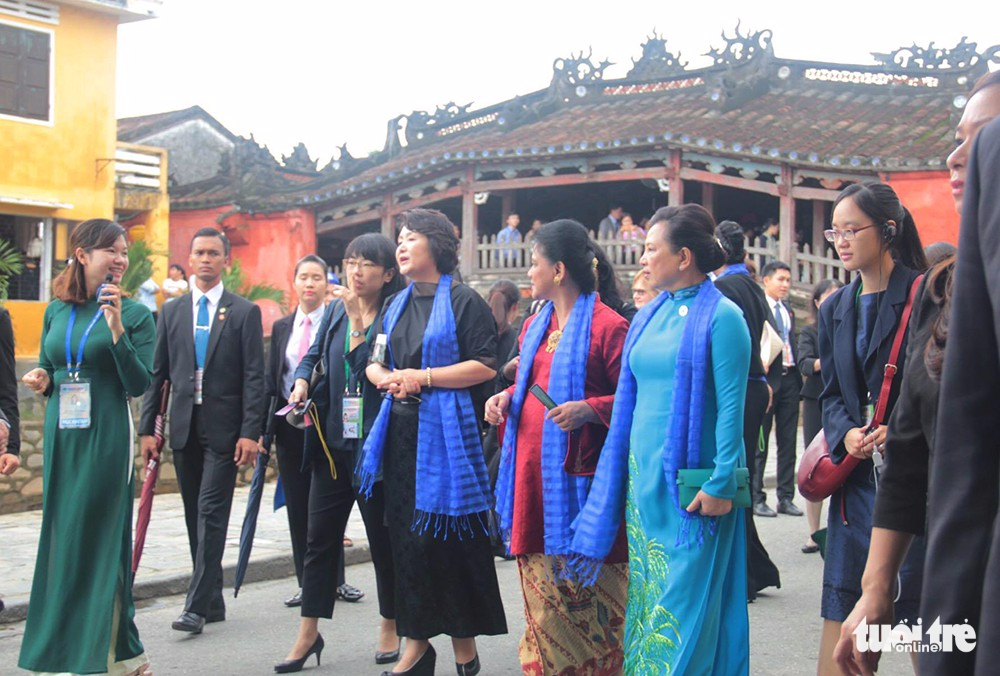 The spouses of APEC leaders spent Saturday touring Hoi An Ancient Town as their husbands and wives met some 30 kilometers away for an annual summit in the central city of Da Nang.

Nguyen Thi Hien, wife of Vietnamese State President Tran Dai Quang, led the group on a tour that explored the culture and lifestyle of the local people.

Hoi An, located in Vietnam’s south-central Quang Nam Province, is a UNESCO World Heritage Site famous for its ancient town that represents an exceptionally well-preserved example of a Southeast Asian trading port dating from the 15th to the 19th century.

The spouses strolled down the town’s streets, chatted with locals, and stopped for a group photo at the iconic ‘Chua Cau’ (Japanese Covered Bridge), which was first constructed in the 1590s by a Japanese community that inhabited parts of the area.

As Hien guided them through the must-see attractions of Hoi An in a light rain, the spouses demonstrated particular interest in the roadside vendors, who sold a variety of items, from freshly brewed green tea to tofu pudding and yellow daisies.

After touring the streets, the spouses were led on a visit to the 300-year-old Hoi An Silk Village, where they observed the arduous process of producing traditional Vietnamese hand-woven silk.

“The spouses even felt the silkworms and cocoons with their own hands,” said Huynh Thi Phuong Vy, who was the group’s guide at the village. “Each of them bought some silk as souvenirs from the trip.”

The spouses also enjoyed a short tea break to taste some of Vietnam’s finest traditional pastries.

Established in 1989, the APEC bloc is a regional economic forum comprised of 21 Pacific Rim member economies that work to promote free trade in the region.

Its leaders met in Da Nang on Saturday for the annual APEC Economic Leaders’ Meeting, hosted this year by Vietnam.