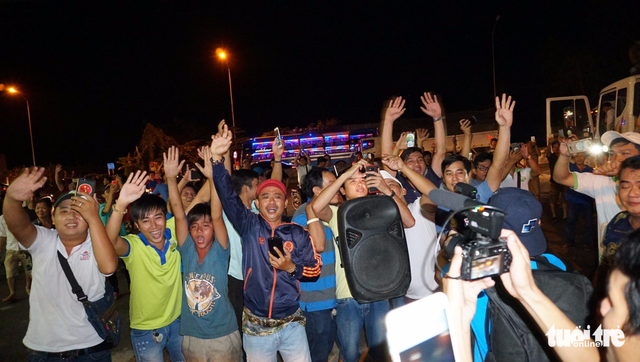 Vietnamese Prime Minister Nguyen Xuan Phuc ordered the operator of a contentious tollgate to stop collecting fees from motorists for one month on Monday, giving way to pressure from the drivers and local media over its misplacement.

The order was given after an urgent meeting between government leaders, the administration of Tien Giang Province, where the toll station is located, the Ministry of Transport, and other relevant ministries to address the concerns of drivers and the press.

“After listening to reports from all parties, the prime minister concluded that there would be a temporary closure of the Cai Lay toll station for one month to review the situation,” Mai Tien Dung, Minister and Chairman of the Government Office, told Tuoi Tre (Youth) newspaper the same day.

The Cai Lay toll station belongs to a BOT (build-operate-transfer) project developer responsible for the construction of a 12km detour around Tien Giang’s Cai Lay Town, along with the 'upgrade' of a 26.5km section of National Highway 1 which runs through the town.

The developer was believed to intentionally 'upgrade' the section, upon a nod from the current minister of transport, so it could place a tollgate to forcefully charge drivers, no matter what way they would choose to travel

BOT is a project-financing framework in which the developer receives a concession from the private or public sector to finance, design, construct and operate a facility for a certain period, during which time it must raise finances for, and is entitled to retain all revenues generated by, the project.

At the end of the agreed concession period, the facility is transferred back to public administrations.

The Cai Lay toll station at night from above. Clip: Tuoi Tre

The tollgate in Cai Lay has come under fire since it first began operating in August, with motorists citing exorbitant rates and its mislocation as the cause of their discontent.

The toll station, drivers argue, should have been located on the newly-built detour instead of on National Highway 1 before it splits into two separate routes. They added that they already paid road fees for using the national highway each year.

The station’s current location forces all drivers to pay the toll, whether they opt to continue on the national highway through Cai Lay or decide to take the detour around the town.

After two weeks of continuous protests from commuters densely covered by local media, the station was forced to enter a temporary shutdown on August 15, with the Ministry of Transport later announcing that the facility would not be relocated.

Instead, the toll rates were lowered by approximately 30 percent, with only local residents exempt from paying the fee.

However, after the toll station reopened last Thursday following a three-and-a-half-month hiatus, the opposition resumed, this time much more fervently.

Only hours after the tollgate’s reopening, it was forced to stop collecting fees again as drivers began paying their fees in the smallest denomination banknotes possible as a means of protest, leading to heavy traffic congestion in the area.

The station would then reopen as soon as traffic was cleared, but then be forced to shut down again once vehicles built up again due to further protests. It was a cycle that repeated dozens of times between Thursday and Monday, with neither side willing to concede.

Experts have also weighed in on the problem, siding with drivers in demanding that the BOT tollgate be relocated on to the detour the project primarily relates to.

“There’s no other option than to relocate the toll station in order to appease the public,” said Tran Quang Chieu, a member of the Finance Committee of Vietnam’s lawmaking National Assembly.

“It must be made clear that drivers have no obligation to pay the toll for using the 26.5km section of National Highway 1, as the costs to have it repaired should have been paid for by their annual contribution to the national road maintenance fund,” Chieu said.

Therefore, Chieu explained, the state should be responsible for paying the project developer the VND300 billion that it spent repairing the section, instead of allowing the company to place the toll station on National Highway 1 to make a quicker return on investment.

Hoang Van Huong, a law professor at the Judicial Academy in Ho Chi Minh City, said that he has been following the developments at Cai Lay, and that the Ministry of Transport is in the wrong for allowing the tollgate to be positioned outside of the detour.

“The people are right to protest. The root of the problem lies in the misplacement of the tollgate, which means it won’t be resolved until it is relocated,” Huong said.

Huong suggested lengthening the concession period for the developer to earn enough payback on their investment after relocation, while banning large vehicles on National Highway 1 during rush hours to ensure the detour serves its designated function – to reduce traffic pressure on the highway.

The man behind the storm

Minister The assumed office in October after being reassigned from his post as the Party chief of southern Soc Trang Province.

The’s role in the development of the Cai Lay project goes way back to 2013, when he was the deputy minister of transport.

According to investigations by Tuoi Tre, The signed three simultaneous dispatches on October 28, 2013 addressed to the Tien Giang administration, its People’s Council and National Assembly delegation respectively, concerning the location of the Cai Lay toll station.

In the urgent dispatches, The asked for all three bodies’ unanimous approval to locate the tollgate on National Highway 1, putting the provincial authorities in a no-win situation with no other choice than to agree to the proposal.

“At the time, the province was badly in need of a detour to solve chronic traffic congestion on the national highway that passes through Cai Lay Town,” Nguyen Van Hung, former director of Tien Giang’s Department of Transport said, explaining the province’s decision to agree to the transport ministry’s proposal.

“We honestly couldn’t have imagined the situation would develop into something so complicated.”

Shortly after the bodies’ agreement to the plan, Minister The signed a decision on December 19, 2013 to officially approve the BOT project, which included placing the tollgate on the highway.

However, as Tuoi Tre discovered, the initial listing of items to be developed by the BOT project issued on September 19 – three months prior to its approval – made no mention of an upgrade to the 26.5km section of National Highway 1.

Up until the time the investment plan was ratified in principle by the central government on November 11, 2013, there had been no sign of such an upgrade in the project description.

The highway upgrade apparently only appeared in the final decision, signed by The, to approve the project, as well as in his aforementioned dispatches to Tien Giang authorities.

The minister pledged to impose strict disciplinary actions on anyone found to be in violation with regard to the BOT project, including himself, the site wrote.