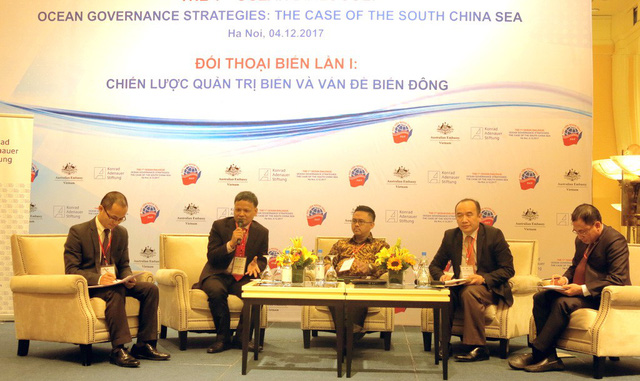 Experts have believed that Vietnam should change its strategy for sea management amidst the serious depletion of maritime resources.

A dialog was organized by the Diplomatic Academy of Vietnam, the Embassy of Australia in Vietnam, and Konrad-Adenauer-Stiftung (KAS) in Hanoi on Monday, with 80 academics and diplomats in attendance.

The gathering focused on strategic maritime management and the situation in the East Vietnam Sea.

Speaking at the event, Nguyen Hong Thao, a member of the United Nations' International Law Commission, said that Vietnam’s strategy of maritime management has been centered on economic development.

However, the current situation requires the country to pay attention to the environment and security along with the goal, Thao asserted.

Maritime economic activities are expected to contribute some 53 to 55 percent of Vietnam’s GDP, which he believed to be an ambitious goal.

The sector has only made up 47 percent of national GDP so far.

Thao added that the country has uncertain maritime policies and strategies, and lacks practical actions.

“As the strategy for maritime economic development was passed in 2007, the fishery ministry merged into the Ministry of Agriculture and Rural Development. Two years later, the Vietnam Directorate of Fisheries was established to act as the former fishery ministry,” Thao highlighted.

He suggested that an agency with sufficient authority be established to effectively implement policies and penalize those that violate regulations on maritime ecosystems.

According to Vu Thanh Ca, former official at the Vietnam Administration of Seas and Islands, Vietnam’s marine management strategy is facing many challenges, especially the exhaustion of resources.

The ecosystem, including fish, is seriously depleted, Ca added.

Wastefulness is another issue as seaports have been constructed in many coastal provinces, while the number of shipments is underwhelming, the pundit stated.

Regarding the East Vietnam Sea, the maritime area has a diverse ecosystem that needs to be preserved, Ca continued.

The  prospective preservation requires all countries in the region to properly manage fishing.

It is necessary to found a joint organization, whose main tasks include protecting the environment, preventing excessive exploitation, and making sure all parties can benefit from the East Vietnam Sea, the expert recommended.

During the dialog, Andrew Wiguna Mantong, researcher at Indonesia’s Center for Strategic and International Studies, shared his country’s experience in dealing with the illegal operations of Chinese fishers.

Illegal fishing hinders the preservation of the ecosystem in the East Vietnam Sea, he underlined.