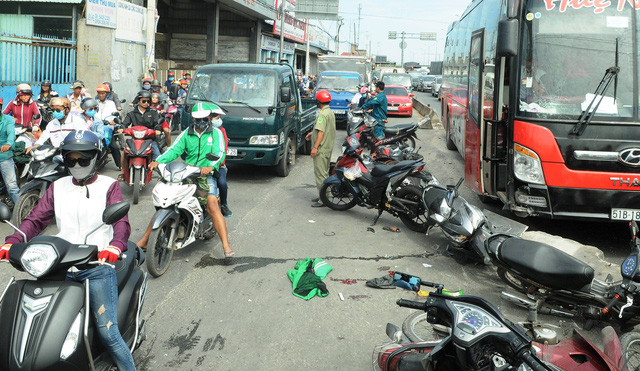 Three people have been hospitalized after a passenger bus slammed into multiple motorcycles stopping at a red light in Ho Chi Minh City on Sunday.

The accident occurred at around 11:00 am at the intersection of National Highway 1 with the road leading to Vinh Loc Industrial Park in Binh Tan District, eyewitness said.

The sleeper bus owned by the Hue Nghia passenger bus line was approaching the intersection when it had a minor collision with a truck, before crashing into a series of motorbikes idling at the red light.

The bus continued to ram the median strip before coming to a halt.

Several motorbikes were damaged while three people were injured and have been taken to the hospital.

According to news outlet VnExpress, seven motorbikes were hit by the sleeper bus.

Police officers arrived at the scene shortly to deal with the accident and control the traffic.

Relevant agencies are working to determine the exact cause of the accident.

In mid-February, a 24-seater coach was running at high speed when it rammed a group of vehicles waiting at a red light, killing two people and injuring several others in the southern province of Binh Duong.