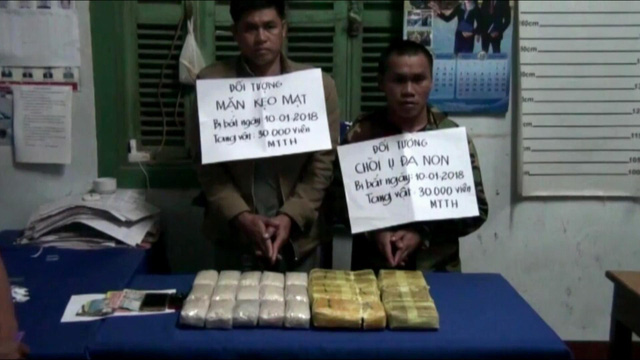 ​Ring busted for smuggling 30,000 pills of drugs from Laos into Vietnam

Vietnamese and Laotian authorities have broken up a ring that smuggled 30,000 drug pills from Laos into Vietnam.

The Border Guard Office in Vietnam’s Quang Binh Province has arrested Choi U Da Non, 28, and Man Keo Mat, 43, for attempting to illegally bring 30,000 pills of synthetic drugs into Vietnam.

Officers confirmed on Sunday they were finalizing a report of the case before transferring the two suspects, who are members of a large-scale drug smuggling group, to competent agencies in the Laotian province of Khammouane, which neighbors Quang Binh.

The pair were apprehended on the evening of January 10 by officers from Quang Binh and Khammouane, when they were carrying the narcotics in an automobile.

Following the arrest, the law enforcers confiscated 30,000 pills of synthetic drugs, three cellphones, THB4,420 (US$138), along with the vehicle.

The suspects claimed that they were about to deliver the illegal products to their Vietnamese accomplices at the border of the two countries.

The drugs were expected to be distributed in Vietnam.

Competent agencies are carrying out a further investigation into the case.

Earlier this month, police in the northern Vietnamese province of Dien Bien smashed a ring that smuggled 500 bricks of heroin, weighing a total of 171 kilograms and worth nearly US$3 million, from Laos into Vietnam.

Dealing in drugs can carry the death penalty in Vietnam.