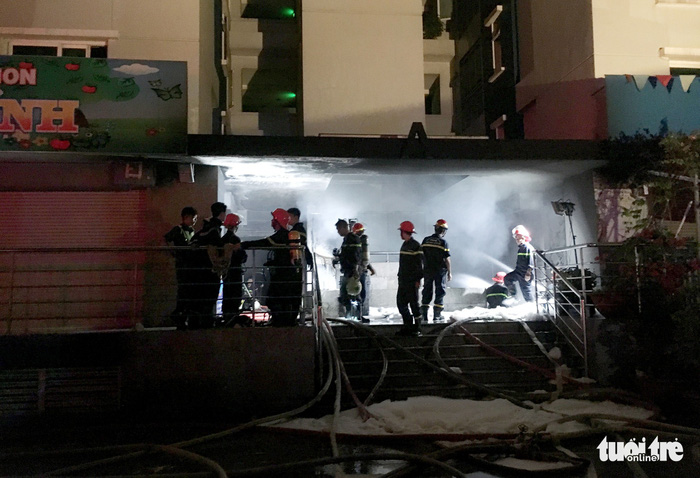 Thirteen tenants were killed and 28 others were injured in a blaze that slowly engulfed a luxury apartment building in Ho Chi Minh City early on Friday.

The fire appeared to begin in the basement and quickly spread throughout the Carina Apartment building on Vo Van Kiet Street in District 8 at around 1:30 am.

As the building was eaten away by the flames, dozens of sleeping residents began trapped inside.

More than 200 firefighters and 34 fire trucks were dispatched to the scene, but were unable to reach several of the residents inside the building.

The fire was finally put out at around 4:30 am.

Nguyen Thanh Huong, acting director of the Ho Chi Minh City fire department, said at 8:00 am the same day that 13 people were confirmed dead and 28 others were injured.

Firefighters bring victims out of the building. Video: Tuoi Tre

The chairwoman of Nguyen Thai Binh Ward of District 1 was among the victims. It is still not clear if she was dead or injured.

The building’s 22,000-square-meter basement with its 1,000 square meter parking area was completely destroyed, along with the 150 motorbikes and 13 cars parked inside.

Many of the rescued residents said the building’s fire alarm never went off.  Instead, it was the fire itself that alerted them to a problem.

“There was no alarm sound and the fire sprinkler system just didn’t work,” one resident said.

“We only learned of the fire when the smoke and heat reached the 14th floor.”

Vo Van Hoan, head of the secretariat of the Ho Chi Minh City administration, said the fire is one of the most catastrophic events to hit the southern metropolis in recent years, resulting in more causalities and damages than any other event since a fire left 60 dead and 70 injured at the ITC trade center in October 2002.

Nguyen Phuc, director of 577 JSC, the developer of Carina Apartments, said the building was put into use in 2009 and no major incidents had occurred until Friday’s fire.

He turned down questions related to the malfunctioned fire alarm at a short media conference held at the scene, saying a thorough inspection is needed before he can give a statement.