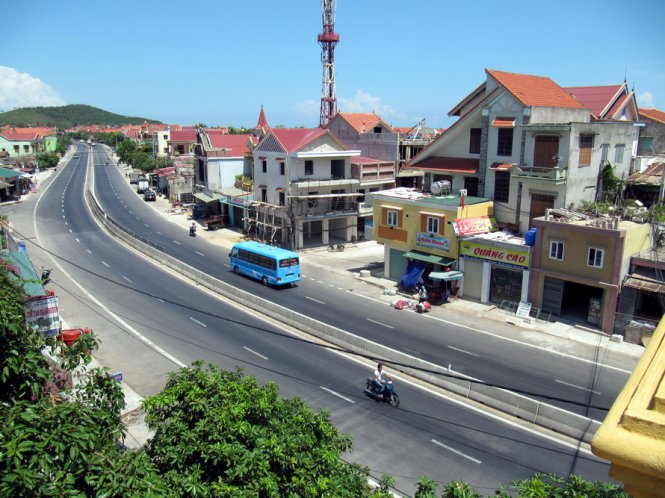 A large number of dwellings have been built very close to Vietnam’s major roads for a long time, constituting an element of the streetscape in many places and imperiling traffic safety.

Ho Chi Minh City is crossed and skirted by five national roads, and the majority of houses transcend the building line, the limit beyond which private construction is prohibited.

One of such arteries, National Route 22, stretching from the northwestern outskirts of the metropolis to the border with Cambodia, has a long portion passing through the city, along which most houses are a few meters away from the curb.

In many sections of the road, the pavement has been appropriated for business by the residents, and no pavement even exists.

Here shop signs are jutting out from the frontage, obstructing the view of passing traffic.

The sprawl becomes more common as one moves to the Provincial Route No. 8, which connects Ho Chi Minh City, and its provinces of Binh Duong, and Long An, although a large volume of traffic, most trucks, travel on this road every day.

A similar situation can be observed along National Route 50, stretching from Ho Chi Minh City, Long An Province to Tien Giang Province, with houses and restaurant abutting the route aplenty.

How to solve the encroachment remains a thorny problem.

Many residents are tempted by the mindset that the road frontage should be utilized to the fullest for commercial purposes.

In 2017, nearly 4,000 cases of using the public road area were reported, according to Vietnam’s department of road management.

The dwellers cleaned or removed construction at the area in front of their houses when the authority arrived, but when the administration disappeared, things turn full circle.

One of the great difficulties the government is facing is that it requires an enormous amount of money to compensate for the removal of the violating houses.

The financial spending is about ten times the costs for building new roads, which the national budget fails to accommodate, said architect Nguyen Ngoc Dung.

The problem has been attracting ideas from a number of people in Vietnam.