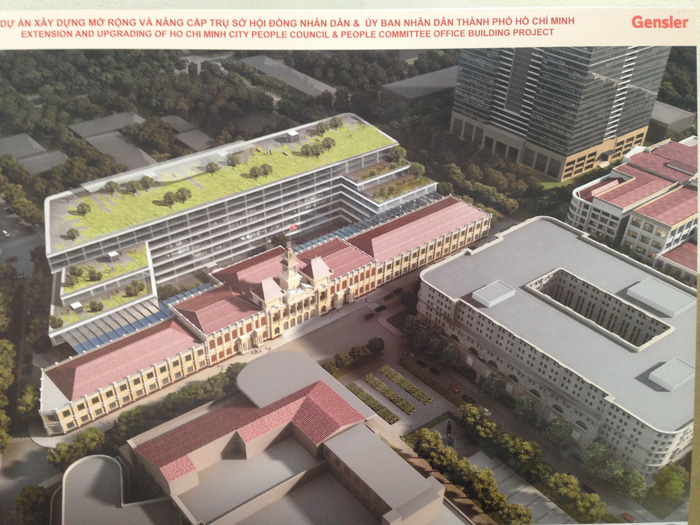 Ho Chi Minh City administrators are soliciting feedback from members of the public through an exhibition on the renovation and expansion design of the municipal administration’s headquarters.

The exhibition, organized by the Department of Planning and Architecture, runs from April 16 to May 1 at the Ho Chi Minh City Exhibition House, 92 Le Thanh Ton Street in District 1.

The design on display was selected from three options proposed by Gensler, a U.S. design and architecture firm headquartered in San Francisco.

According to the design, the new administrative center will be constructed on an 18,000 square meter piece of land, facing four streets, Le Thanh Ton, Pasteur, Ly Tu Trong and Dong Khoi.

The building will consist of two main sections, including the existing headquarters at 86 Le Thanh Ton Street and a new facility with six floors and a four-level basement.

The first two underground levels of the new building are expected to be the workplace of the municipal People’s Committee and decision-making People’s Council, while the second to sixth above-ground floors will become offices for eight departments.

The first floor will be the meeting place for citizens and competent authorities.

The new center will also include a large hall, which can accommodate 800 people, and a 400-seat conference room to host meetings of the People’s Council.

The building, whose roof is expected to be covered with green trees, will overlook the Saigon River.

Speaking at the exhibition’s opening ceremony, Nguyen Thanh Toan, deputy director of the city’s architecture department, stressed that the project plays a significant role in the development of the southern metropolis.

The design is up for adjustment based on suggestions from local residents, businesses, and organizations, before being submitted to the People’s Committee for approval, Toan said.

Here is a closer look at the design: