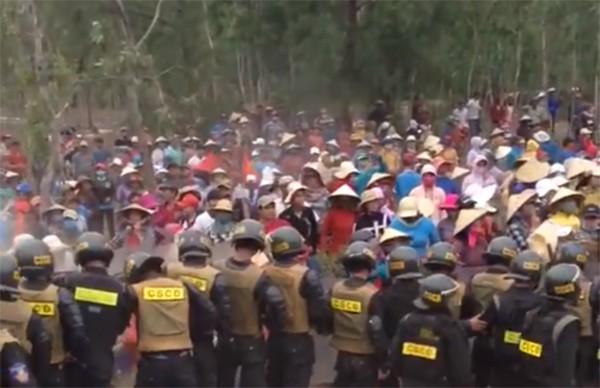 Hundreds of residents in the south-central province of Binh Dinh gathered on Wednesday near the planned construction site of a wind power plant, trying to stop engineers from setting up wind monitoring systems.

Some residents were put under arrest for disrupting public order after they threw dirt at police officers and attacked them with tree branches.

The crowd, which was comprised of locals in the communes of My An and My Tho in Phu My District, remained on the site from midday until well into the evening, when they tried unsuccessfully to occupy a stretch of the lifeline National Highway 1.

The residents believed that the wind farm may do harm to local forests and the environment.

“The residents’ opposition to this project is completely ungrounded,” said Nguyen Van Dung, chairman of Phu My District.

The wind power project in question is located in My An Commune and developed by Hanoi-based construction company Vietracimex.

On Wednesday a group of Vietracimex engineers were erecting wind monitoring systems at the site when they were challenged by the angry locals.

“The installation [of wind monitors] was temporary and only occupied an area of ten square meters, with no trees destroyed and no harm done to the environment,” a provincial leader said.

According to the official, the clean energy project had been made known to locals well before its launch, and the developer had pledged to adhere to strict environmental standards.

“Therefore, it is unjustified for the residents to oppose the project so strongly,” the official said.

Last month, locals in Phu My District also blocked part of the National Highway 1 for over seven hours to protest against a seafood factory project over environmental concerns.