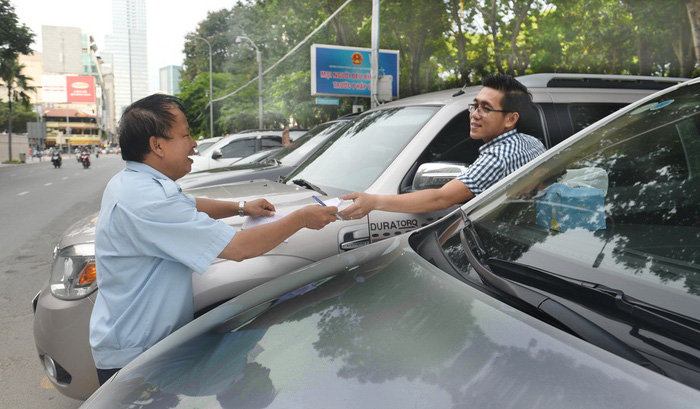 Thirteen out of the 32 streets are located in downtown District 1, while the others are divided among District 3, District 5, District 10 and District 11.

Vehicles with ten or more seats or trucks weighing more than 1.5 metric tons are subject to higher rates.

Parking fees increase progressively over time, but not exceeding VND170,000 ($7.48) for the first five hours.

Vehicles are not charged for parking on streets between 12:00 am and 6:00 am.

According to the municipal Department of Transport, the new rates are designed to be around 20-25 percent higher than those in shopping malls, as the city does not want to encourage parking on streets.

It is estimated that the city will collect an additional VND30 billion ($1.32 million) per month from on-street parking after the raise.

Drivers who want to park on these 32 streets are required to install a mobile application through which they can manage their parking hours and pay parking fees.

The mobile app has been piloted since September last year at some street parking spaces in District 1, operated by local mobile carrier Viettel.

The app allows drivers to check for and reserve available parking spaces as well as preview parking rates on each street.

A human employee will be present to check if the driver has paid their parking fee before allowing a car to leave.

The right to operate parking lots will be open through public bidding to all network operators, which will collect fees on behalf of the city administration.

Parking meters, devices used to collect money in exchange for the right to park a vehicle in a particular place for a limited amount of time, are expected to be rolled out in 2019.

The new rates have been met with both criticism and praise from drivers.

“Car owners have paid too many fees just to buy a car already, wouldn’t it be too much of a burden for us to pay higher parking fees as well?” asked Phan Van Bao, a driver for ride-hailing service Grab.

Bao questioned whether higher fees would entail more protection against theft and vandalism, which are common risks for parking cars on the street in Vietnam.

Meanwhile, Tran Thi An, a car owner living in District 1, hailed the decision as an effective measure to discourage drivers from clogging the city center.

When parking rates are high, drivers will think twice before driving their cars to the city center and can consider choosing public transportation instead, she said.