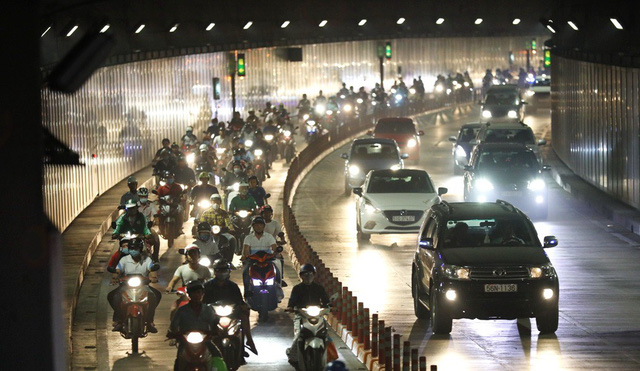 In the early morning of Thursday, thousands of motorbikes were seen inching through the underwater passage, also known as the Thu Thiem Tunnel, traveling from District 2 to District 1.

The air was reportedly stuffy and the road users became difficult to breath, with many of them, especially women, feeling dizzy when reaching the middle of the tunnel.

Trinh Thi Nguyet, who commutes through the tunnel to work, told Tuoi Tre (Youth) newspaper she often feels queasy when she is inside the passage, and the feeling just vanishes as soon as she passes its exit.

Huynh Tan Tai, a resident in District 2, said he also develops the same problem of queasiness when going through Thu Thiem Tunnel, especially during rush hours.

During peak time, it usually takes drivers 15 minutes, rather three minutes as usual, to pass through the tunnel as a number amount of vehicles will fill the passage. It will understandably result in a shortage of fresh air.

“It is better to have an electronic panel at both ends of the tunnel, displaying such parameters as temperature, humidity, wind speed, and noise level inside the structure,” Tai suggested.

Le Minh Triet, director of the Saigon River Tunnel Management Center, said that he has received complaints from commuters regarding the health problems arising when they pass the tunnel.

The director has ordered workers to measure the carbon monoxide level inside the tunnel, with the latest results ranging between 100 to 120 parts per million (ppm), well below the harmful level of 200 ppm.

“Sudden air change [from open to confined space] could be one of the reasons causing breathing difficulty and tinnitus when people enter the tunnel,” the director argued.

Tri also asserted that the amount of vehicles passing through the tunnel is only 70 percent of the structure’s capacity.

A long-term solution is to the problem, according to Triet, is to speed up completion of three more bridges, namely Thu Thiem 2, 3 and 4, crossing the Saigon River, to reduce the amount of traffic through the tunnel.

This will help reduce the levels of CO, noise, and dust inside the structure and potentially lessening the health problems for commuters, he said.

Unfortunately, construction of the three Thu Thiem Bridges has been very slow, he added.

The director also said that his agency, along with the city’s health department will conduct regular checks in terms of air quality and CO and noise levels as an immediate response to these problems.

Some 290,000 vehicles pass through the Saigon River Tunnel on a daily basis, according to its management center.

There were cases when the level of toxic gas inside the tunnel reached 200 ppm, despite the three large pairs of ventilation fans to facilitate air flow and reduce CO level there.

Dr. Do Thi My Lien, deputy director of the Institute of Environment and Energy Technology of Saigon University, said the problem of dizziness could just be an ‘illusion’ as commuters enter darker and smaller areas from the bright, open space.

However, Dr. Lien also suggested that the agency in charge of managing the tunnel should measure the air inside regularly to ensure its safety.

“It is expected that the amount of vehicles passing the tunnel every day will exceed its capacity by 2020, which could result in more harmful consequences for commuters,” she warned.

Thu Thiem Tunnel, running underneath the Saigon River with a total length of 1,490 meters, was officially open to the public in 2011.

The underwater structure is the largest of its kind in Vietnam, having three traffic lanes in each direction.