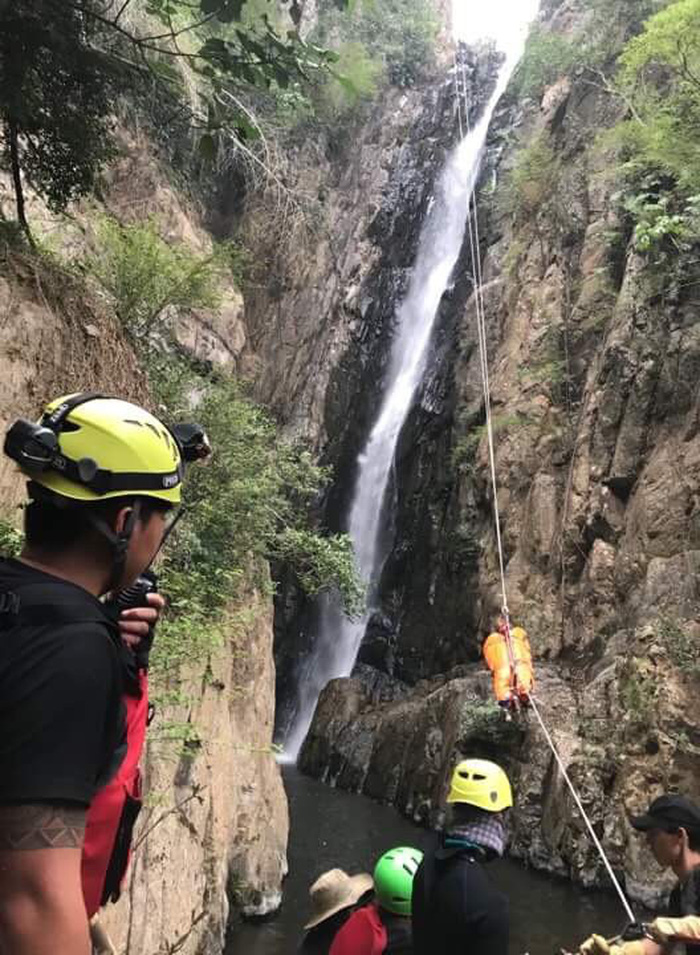 A rescue team worked hard for more than two days to bring home the body of a backpacker who was found dead after getting lost while trekking through a forest path in southern Vietnam over a week ago.

T.A.K. went missing on May 11 while trekking in a group on the 60-kilometer Ta Nang-Phan Dung trail, which runs from Lam Dong Province in Vietnam’s Central Highlands to the south-central province of Binh Thuan.

The forest covering the trail is famous for its scenic beauty but poses potential danger to first-time explorers, as it has a number of waterfalls and fast-flowing streams.

Over 100 people had joined in the efforts to search for the missing 24-year-old trekker, before he was finally found dead and trapped at the bottom of the Lao Phao waterfall in the jungle on May 20.

It was not until May 23 that the rescuers managed to transport the body to the end of the Ta Nang-Phan Dung trail in Binh Thuan, after a strenuous bid that lasted about 50 hours.

The victim’s mother was there to receive her son's corpse and took him to Ho Chi Minh City.

K.’s body had lain at the waterfall for more than ten days as attempts to retrieve it met with hindrances of accessibility to the forest.

A group of volunteers knowing the trail well and mastering rescue skills was formed for the purpose, including Nguyen Quoc Huy and Tran Ly Tuong, who felt sorry for the plight of the victim.

Now that the search and rescue efforts ended, the group recalled the tough task and explained why it took them more than two days to be able to retrieve the body.

On the first day after knowing of the location of the deceased trekker, the group set off in the early morning in Da Lat, the capital of Lam Dong, walked along devious paths in the jungle for nearly five hours before reaching the three-story waterfall, where K. was lying, according to Huy.

“This is a completely deserted place that even no natives have ever got to,” Huy said.

All members had to wear face masks and put on medicated oil to protect themselves from the assault of the odor emanating from the badly decomposing body, which they were unable to stand near for 30 seconds with a bare nose.

Tuong said they anchored ropes at several points up the waterfall cliff, which he estimated to be 90 meters high, and manually pulled the body to the top gradually.

The body was left at one-third of the height of the waterfall from the bottom when night fell and the volunteers became exhausted.

They stayed awake through the night, shivering in icy cold winds in the jungle.

“We initially thought the job would be done within a day, so we didn’t bring much food,” he admitted.

“But it turned out to be too difficult and lasted longer than expected.

“At the end of the day, our stomach was rumbling ravenously.”

Huy added that the rescuers were worried they had to start afresh if there was a problem with the anchors and ropes.

“We were all nervous and just wanted the morning to come quickly,” he said.

The volunteers resumed at dawn and continued hard into the late afternoon, when they again felt worn out as a result of moving the rope system and pulling the body to the top.

The body was then carried on a motorbike down a one-meter-wide slope which they said can only be maneuvered by the most skillful riders.

Huy recalled that surrounding the vehicle was four subgroups; one cleared the path at its front, two kept the motorbike in balance and the other held the body in place at the rear.

“We inched down along the way, hands all numb,” he continued.

They reached the end of the Ta Nang-Phan Dung trail fatigued at 10:00 pm on May 25, around 50 hours since the strenuous effort was initiated.

The victim’s mother collapsed at the sight of her son’s body, and the volunteers were moved to tears at the moment.

“The mother had wept copiously for over ten days. Her voice was choked while she was saying the child’s name,” Tuong said.