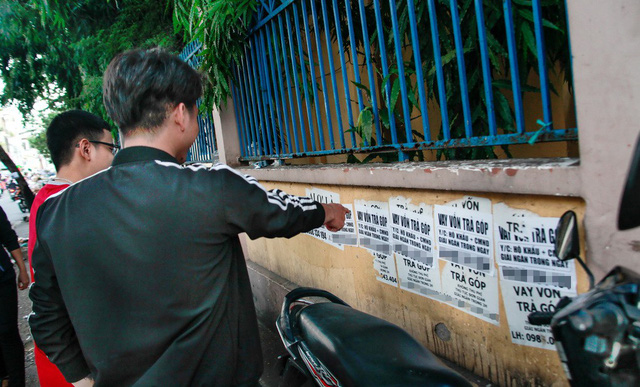 Loan sharks in Ho Chi Minh City are bringing their operations to the Internet, providing easier access to their loans while maintaining their terrorizing approach to dealing with debtors.

As countless websites offering quick and easy loan services continue to pop up on the world wide web, an increasing number of residents are turning to loan sharks when they find themselves in need of quick money, often unaware of the hidden risks.

H., an office worker in District 3, shared of his experience taking out a 30-day VND2.5 million (US$109) loan from a site named Doctor D.

The loan agreements called for her to pay back VND3.48 million ($151), including an interest rate of 39.2 percent, at the end of the period.

After paying her debt, H. was surprised that the site charged her an extra VND1.2 million ($52) as a ‘payment extension fee.’

The woman refused to pay the additional cost and was terrorized by the lenders via phone calls.

They even had their employees threaten her at her home, forcing the woman to eventually pay up.

Another website offering a similar service requires its borrowers to offer up their household registration books, salaries, and even iCloud accounts as collateral.

According to an employee, using iCloud as collateral is new to the market.

If debtors refuse to pay up on time, the lender is able to log in to the mortgaged iCloud accounts and lock them, thus rending iPhones unusable.

Borrowers who choose this approach are limited to loans of equal or lesser value to their phones.

However, the site still encourages its clients to opt to the traditional forms of collateral, such as household books.

The average interest rate on the site is about 15 percent per month, or 180 percent a year.

Some also offer collateral-free loans, with the amount of lending dependent upon the borrower’s monthly salary.

Borrowers are able to receive the money after only 30 to 40 minutes at annual interest rates of approximately 40 percent.

Following the trouble-free lending process, loanees are likely to find themselves in terrifying situations if they fail to meet the pre-set deadlines to return the money.

Even people who do not actually borrow money have also been victimized by how loaners collect their debts.

H.Q., who lives in District 3, said she had recently been annoyed by employees of a finance firm after a debtor redirected all incoming calls from his phone to hers.

“They called me day and night, even on weekends, to remind me about the debt,” Q. stated.

M., hailing from the Mekong Delta province of Tra Vinh, was also caught in the same situation after her friend put her phone on the reference list of his borrower profile.

Online lenders under no management

Meanwhile, Nguyen Chi Hieu, a financial expert, said that the state bank only manages local banks and finance firms, while pawnbrokers are controlled by competent authorities.

This leaves a loophole that allows loan sharks to offer their services on the Internet without restriction, Hieu continued.

Other times, operations are able to dodge the law by registering as a pawnshop business but operating as a credit institution, said Truong Thanh Duc, a local lawyer.

Current regulations allow pawnshops to receive only goods as collateral while prohibiting the use of IDs and household books, Duc elaborated.

If the borrowers fail to pay up, pawnshop owners can sell the items to recoup their money.

They are strictly prohibited from threatening or forcing the borrowers to pay the money in any way, the legal practitioner explained.

Credit institutions can only charge maximum interest rates of 30 percent a year, as per the Civil Code, Duc added.

Meanwhile, many loan sites offer interest rates of up to 300 percent a year.