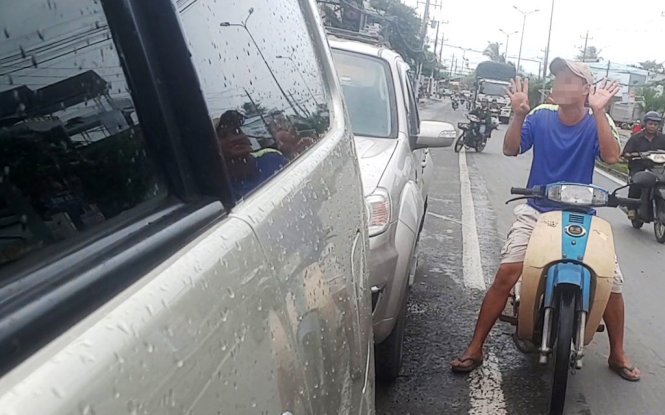 Drivers who desire to considerably diminish their waiting time at two major ferry crossings in Vietnam’s Mekong Delta have achieved this purpose by paying some money to people who are not from the ferry service staff, an everyday practice that suggests under-regulation.

In order to arrive at the other side of the Hau (Back) River, one of the major branches of the Mekong River in Vietnam, vehicles may board ferries at the Vam Cong Ferry Ports, with one terminal in Dong Thap Province and the other in An Giang Province, or the An Hoa Ferry Ports in the latter area.

The Hau River separates one part of the Mekong Delta from the other, which means the terminals play a crucial connective role for inter-regional traffic.

The number of cars, buses and trucks using the service is usually so great that they have to queue up over an hour before they can get on board a ferry.

When an agreement is made and money given, the driver will leave the line, follow the paid helper, who is at the time clearing incoming traffic to make way for the driver in a wrong lane.

The driver subsequently gets to the other end of the line near a port entrance while staff members from the ferry operator are regulating traffic to and from a docked ferry and usually turning a blind eye to the out-of-queue vehicle.

At the Vam Cong Ferry Ports alone, the for-money ‘guides’, numbering over five, are mostly natives to An Giang and Dong Thap and have been familiar faces to the staff here, said Nguyen Phuc Nguyen, head of the ports’ management.

Ferry workers have tended to baulk at intervening in the guides’ action for fear of retaliatory physical attacks, Nguyen said, recalling such an incident last month after which the affected staff member had to be transferred to another place for his own safety.

But Nguyen Quoc Tuan, a local government leader in An Giang, blamed the common practice by the vehicle guides on the ferry operators’ failure to rein them back.

“The operators all have security cameras at the terminals. A car can never move to the front of the line if their staff resolutely refuse to let it do so,” Tuan said.

The authorities can step in if they find that the practice violates law, but in this case it does not; or if the operators report cases of public disorder caused by the action, Tuan added.