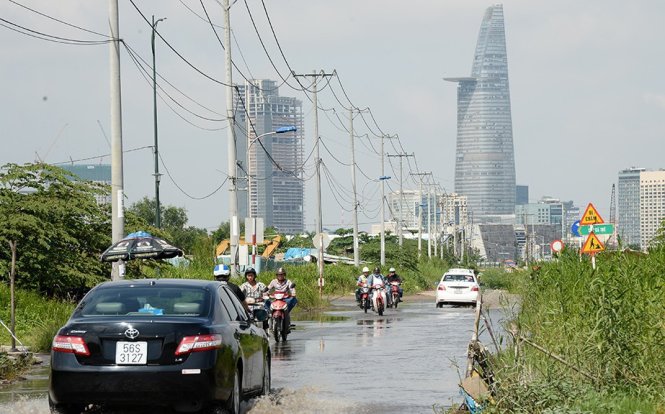 As an expert from the Netherlands has recently warned that Ho Chi Minh City is among the five cities across the world that are at risk of sinking, a seminar on the issue was organized by Tuoi Tre (Youth) newspaper on Tuesday.

The attendees, including Dr. Rien A.C. Dam from the Netherlands and many local experts, believed that subsidence in the southern Vietnamese metropolis is in its initial stages, but serious consequences will come if no effective measures are taken.

Ho Chi Minh City may end up under water in the future, having sunk by half a meter over the past 25 years, according to Gilles Erkens, a Dutch expert from the Netherlands-based Deltares Institute, who did not attend Tuesday’s event.

Erkens said excessive groundwater exploitation may be to blame for the issue, a view shared by Dr. Dam as he addressed the seminar.

The Dutch expert said that excessive groundwater exploitation previously caused the Netherlands to become four to six meters lower than sea level, and the Vietnamese metropolis is in a similar situation.

As local authorities cannot simply impose a complete ban on the use of groundwater in a short amount of time, the expert underlined that specific policies must be established.

Statistics from the municipal Department of Natural Resources and Environment showed that over 716,500 cubic meters of groundwater is exploited in the city on a daily basis, of which 355,000 cubic meters is used by local residents.

Using Japanese technology, these reservoirs will be easy to construct and not require too much space, Chin continued.

According to Do Tan Long, an official from the city’s Steering Center of Urban Flood Control Program, a detailed geological map of the entire city should be built to highlight the conditions of each area.

Based on the map, specific requirements will be given to constructions and projects in order to ensure the city’s sustainable development, Long elaborated.