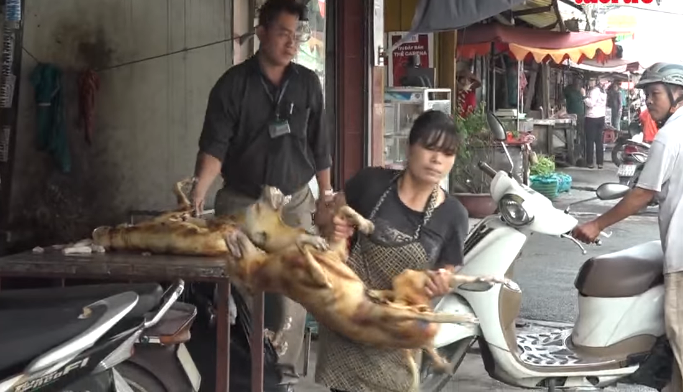 Many roadside vendors hurriedly moved their dog meat away during the latest government inspection at the largest dog meat trading area in Ho Chi Minh City on Tuesday morning.

The unexpected shakedown prompted a scene of sweat and speed, when multiple sellers at Trung My Tay Market in District 12, famous for its abundant dog meat on sale, dashed off carrying the meat to dodge officers.

The sellers swiftly covered the slaughtered dogs, still in their full bodies, in black nylon bags, and slammed the doors of their shophouses, which may also serve as abattoirs.

Dog meat sold at the market came mostly from canines that had been stolen from owners, with or without the use of poison, a seller here said.

Over one metric ton of dog meat, which is commonly consumed in Vietnam, confiscated at the market was destroyed during the first half of this year alone, according to Nguyen Duc Tam, a senior official in Ho Chi Minh City.

In October 2016, the District 12 administration started banning any sale of meat from pets, which are typically understood to be dogs and cats, and asked residents to report any slaughterhouses killing dogs of dubious sources.

Dog meat vendors have been encouraged to sell other types of products.

But some have still maintained the lucrative business by keeping dog meat out of sight and deceptively displaying non-meat items at their kiosks, or taking purchase orders via phone calls.

Inspections take place quite regularly at the market but sellers often quickly run away at the sight of the authorities, who then seize dog meat left in a hurry.

Earlier this month, the administration of Hanoi issued a document requesting competent agencies to tighten the management of the slaughter, trade, and use of dog and cat meat across the capital.

The move is aimed at promoting the humane treatment of animals and gradually eradicating the habit of using dogs and cats as food.