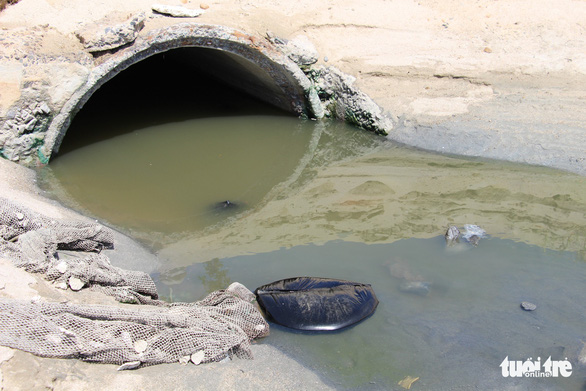 People are avoiding a beach in Nha Trang City in south-central Vietnam like the plague after a drainage opening was found discharging foul-smelling water directly into the ocean.

Blackish water that reeks of putrid smell was seen being dumped from a drainage opening on Pham Van Dong Street into a nearby beach, situated in the Nha Trang Bay, according to footage filmed on Wednesday by Tuoi Tre (Youth) newspaper.

Garbage, litter, fishing nets and pieces of wreckage collected around the opening, creating an unsightly scene.

Once packed with visitors, the beach has recently become deserted due to the pollution, locals said.

On Pham Van Dong Street that runs along the coastline, commuters covered their nose whenever they drove past the stinking area.

Nguyen Chi Danh, head of the natural resources and environment division of Nha Trang, said authorities are aware of the pollution but no effective measures have so far been taken to resolve the issue.

The division has requested that a local water company and public services take part in dredging works to eradicate the foul smell.

Dirty water is discharged from a drainage opening into the ocean in Nha Trang City in south-central Vietnam. Video: Tuoi Tre

However, some residents living nearby have connected their household sewage outlets to the system, polluting rainwater that is dumped by the drain into the ocean.

“As this part of the city does not have a sewage treatment plant, residents are required to install septic tanks at their homes to treat sewage,” he explained.

There are a total of three drainage openings leading to the ocean on Pham Van Dong Street, but only this one has encountered such an issue due to it being located near a residential neighborhood, said Vo Tan Thai, director of Khanh Hoa Province’s Department of Natural Resources and Environment.

All violations will be dealt with pursuant to the law, he added.

Nha Trang, located in Khanh Hoa Province, is a popular destination among domestic and foreign visitors for its tropical beaches and scenic landscapes.

The city welcomed over 4.4 million visitors in the first eight months of 2018, more than twice last year’s figures, according to the provincial tourism department.