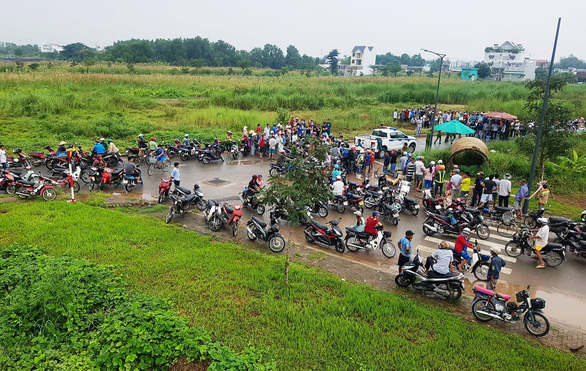 A 15-year-old was taken into police custody as the primary suspect in the death of a student Grab driver in Ho Chi Minh City last week, a source told Tuoi Tre (Youth) newspaper on Wednesday.

The teenager, Le Minh Thuan, faces murder and robbery charges after admitting to police that he killed the GrabBike driver and escaped on the victim’s newly-bought motorcycle.

Thanks to CCTV footage and the mobile phone left at the scene of the crime, police were able to quickly identify Thuan and take him into custody.

Around 10:20 am on October 19, a resident in Binh Chanh District found a young man lying motionless in a deserted area along a local road, according to a previous police report.

He was wearing a green Grab jacket and his body was covered in blood.

The local also noticed a man wearing a blood-stained white shirt fleeing the scene on a motorbike.

Upon arriving at the scene, officers determined that the lying man was dead and had been stripped of any identification or wallet he may have been carrying.

The deceased was later identified as 20-year-old Le Nhat Hao, a student at the Ho Chi Minh City University of Transport 2. Autopsy results show that he was killed by a stab wound in the neck.

Police said on Wednesday they found a mobile phone belonging to Thuan at the crime scene.

CCTV footage taken from a local gold shop where Thuan works revealed that he rode the victim’s motorcycle to the facility and threw a Grab-branded raincoat in front of an opposite house at around 11:56 am the same day.

He then left on the vehicle about 15 minutes later.

According to Vietnamese law, 13-16-year-olds can be sentenced to a maximum of 12 years behind bars if convicted.