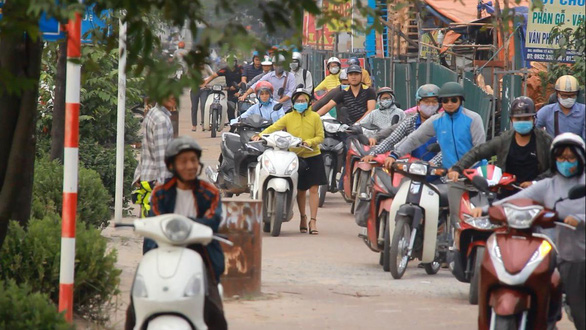 Hundreds of people have been pushing their vehicles the wrong way on the sidewalk along a street in Hanoi to avoid severe congestion during rush hours, raising concern over the unreasonable traffic planning and management in the area.

A video of an endless line of drivers pushing their motorbikes along the promenade of To Huu Street, in the opposite direction of the traffic flow, has been going viral on social media over the last few days.

According to the observation of Tuoi Tre (Youth) newspaper reporters, up to hundreds of commuters can be seen walking their vehicles this way at the location in order to travel from To Huu Street to Trung Van Street during rush hours.

Commuters said they have to pass a 400-meter section on To Huu to reach the allowed location to make a U-turn to enter Trung Van.

However, as it takes as long as 20 minutes to complete such a short journey due to congestion, the best solution is to travel the wrong way on To Huu to reach an alley that also leads to Trung Van.

As riding motorcycles on the sidewalk is against regulations, these commuters have come up with the idea of walking their vehicles as it helps them avoid both the traffic jams and hefty fines from traffic police officers.

An expert on traffic regulations stated that traffic police are indeed unable to fine these commuters if they are not actually riding the vehicles.

Major Nguyen Duc Thang, chief of the traffic police team in charge of managing the area, also confirmed the situation to Tuoi Tre, stating that it happens on a daily basis.

“We have fined some people who rode their motorbikes on the promenade. However, we have no legal basis to penalize those who push their vehicles,” Maj. Thang elaborated.

While many believed it is unacceptable for the commuters to take advantage of the legal loophole, others expressed their understanding and attributed the problem to unreasonable traffic management along the street.

According to Sinh, a local resident, To Huu Street is often susceptible to gridlock due to the large number of vehicles, especially during rush hours in the morning and evening.

Those who can no longer stand the traffic jams are forced to break the rules and travel the wrong way on the sidewalk.

As narrow as it is, To Huu has to dedicate exclusive lanes in both directions to the city’s BRT (bus rapid transit) services, which only exacerbate the congestion.

Lieutenant Colonel Nguyen Manh Hung, deputy head of the Hanoi traffic police unit, said that the agency will work with the municipal Department of Transport to rearrange traffic flow on To Huu Street to cope with the issue.

Meanwhile, the Tuoi Tre reporters have been unable to reach deputy director of the Hanoi transport department Ngo Manh Tuan, either personally or via phone calls, for comment, as the official appeared to be busy most of the time.