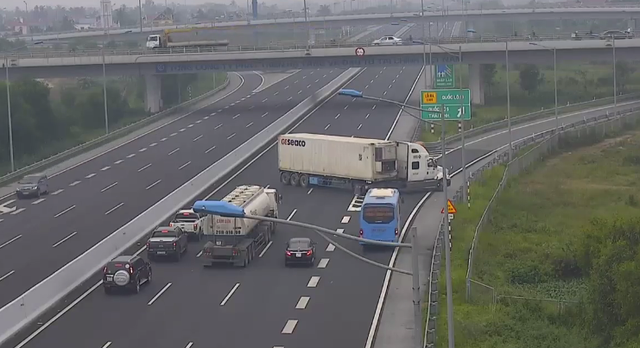 A tractor-trailer was seen in a video going viral on social media on Saturday driving in the wrong direction, apparently after making an illegal U-turn, on an expressway in northern Vietnam.

The footage was captured by the CCTV system of the Hanoi - Hai Phong expressway, which connects the two namesake cities, at 8:13 am, the highway’s management board confirmed later the same day.

The tractor-trailer, whose license plate was identified as 72C-121.80, had committed a serious breach of traffic regulations with its reckless action, according to the managers.

The truck was apparently trying to reach an exit it had missed, according to the video.

The tractor-trailer almost blocked the street, where the maximum speed limit is 120kph, causing many other vehicles to apply a sudden brake.

The video was uploaded on Facebook and quickly went viral.

The Hanoi - Hai Phong expressway managers said they were able to stop the trailer truck and handed the case to a local traffic police unit.

In the latest development, a unit of the traffic police unit under the Ministry of Public Security said on Saturday night that the driver was fined VND7 million (US$300) and had his driving license revoked for five months.

The driver, hailing from a central province, said he was not familiar with the expressway so he missed the exit.