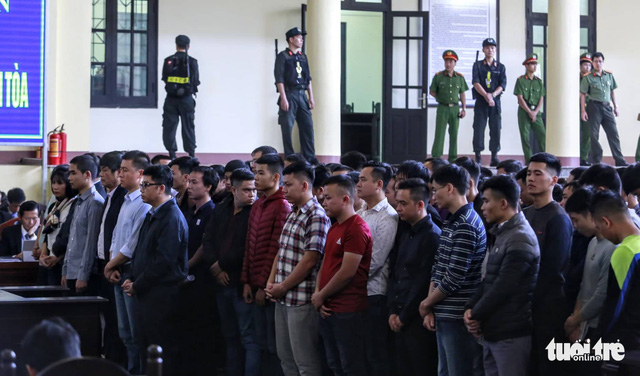 A court in the northern province of Phu Tho on Monday morning started trialing two former senior officers of the Ministry of Public Security and 90 other defendants for their alleged involvement in a major online gambling ring worth a whopping US$424 million.

Both are prosecuted for “abusing positions and powers while performing duties," an offense that carries a maximum jail term of ten years.

The court said this is a case with a lot of complexities and a record number of defendants in Phu Tho.

Nearly 100 witnesses and people with relevant interests and obligations will also be summoned to the trial. Over 30 lawyers will represent the defendants.

A massive outdoor court with a capacity of 2,000 people was set up in Phu Tho over the weekend for the first-instance trial, which will last for 15 days.

Security was tightened outside the court hall, as all attendees were made to go through extensive security checks before they were allowed inside.

A board of five Phu Tho judges, headed by judge Nguyen Thi Thuy Huong, will hear the defendants.

Attendees go through security checks outside the court hall in Phu Tho Province, northern Vietnam on November 12, 2018. Video: Tuoi Tre

The 92 defendants are accused of being involved in the ring that organized online gambling through websites known under different names.

According to their indictments, the defendants employed advanced technology in running the illegal businesses that took place in Phu Tho and some other provinces and cities.

Phan Van Vinh and Nguyen Thanh Hoa provided support by abusing their positions and powers in their respective agencies to prevent the gambling ring from getting busted.