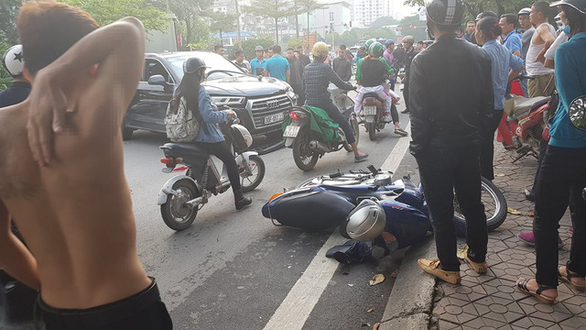 At least one person was injured when an Audi car that was reversing at high speed on a street in Hanoi plowed into oncoming traffic on Monday afternoon.

The accident involving the Audi Q5 occurred on Nguyen Khanh Toan Street in Cau Giay District at around 4:45 pm on Monday, according to footage from a dashboard camera.

The driver appeared to lose control of the vehicle as it zoomed across the street, crashing into two motorcyclists and climbing over the lane divider.

Once on the other side of the street, the car switched back to forward gear and rammed into a white Mercedes moving in the opposite direction.

Witnesses said they saw the Audi driver leaving the scene after causing the accidents.

At least one person was injured in the collisions as traffic became congested on the downtown road in the afternoon rush hour.

Police officers arrived at the scene soon after to bring the injured to hospital and conduct scene examination.

Early this month, legal debate erupted in Vietnam over a six-year prison sentence imposed on a truck driver involved in a deadly collision with a car that was going in reverse on a high-speed expressway.

On Saturday, a video went viral on Vietnamese social media showing a tractor-trailer driving in the wrong direction, apparently after making an illegal U-turn, on an expressway in northern Vietnam.