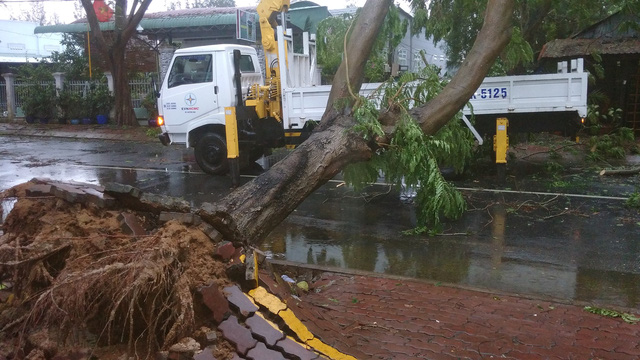 Tropical Storm Usagi was downgraded to a tropical depression on Sunday afternoon, but downpours and extreme winds are still wreaking havoc on many localities in southern and south-central Vietnam.

The tropical depression reached the mainland between the south-central province of Binh Thuan and the Mekong Delta province of Ben Tre as of 1:00 pm, the National Center for Hydro-meteorological Forecasting reported.

Average wind speed was recorded at 40 to 60km per hour and squalls at up to 88km an hour.

The low-pressure system is expected to travel northwest in the next 12 hours and continue weakening.

Torrential rains are forecast to dampen provinces in the southern and south-central regions as well as some localities in north-central Vietnam and the Central Highlands from November 25 to 27.

The weather condition appeared to have been worsening compared to the morning of the same day.

At Can Thanh Town in coastal Can Gio District, a 10-meter tall tree was uprooted and fell onto a local power line, resulting in a power outage in the neighborhood.

Consistently heavy rains have caused many areas to be severely inundated in Cam Ranh anh Nha Trang Cities in the south-central province of Khanh Hoa.

Dozens of local shrimp farmers had their aquatic animals washed away by floodwater, causing them heavy losses.

Meanwhile, competent authorities in the south-central province of Ninh Thuan have been dealing with an issue that had occurred to the north-to-south railway system.

Floodwaters with strong torrents previously washed away a high amount of soil from the ground, leaving a large hollow space underneath the train tracks.