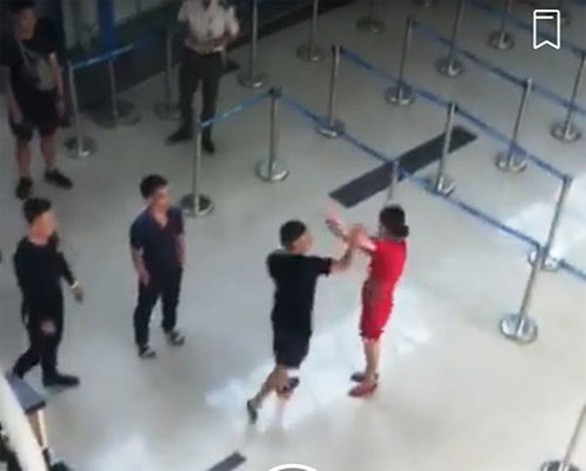 Four security officers at an airport in the north-central Vietnamese province of Thanh Hoa have been fined following an incident where a group of men attacked a female airline employee at the facility in late November.

Trinh Hong Quan, Vu Quoc Hoi, Trinh Ngoc Hoan, and Dao Van Dung, who are members of the security unit of Tho Xuan Airport, were fined VND4 million (US$171) each for failing to follow protocols, affecting civil aviation operations at the airdrome.

The fining is in accordance with Government Decree No. 147, which dictates that such an error should subject one to a VND3 million ($128) to VND5 million ($213) penalty.

The friend was scheduled to board a flight to Ho Chi Minh City at 3:05 pm.

Nhi, Dung, and An then asked Le Thi Giang, a ground service staff of budget carrier Vietjet, to take a photo of them, before continuing to ask her to join them for a group selfie.

Giang refused the second request, just to be verbally abused by the three men.

An and Nhi later slapped the woman and hit her head with a phone.

Le Thi Hien, a representative of the airline, attempted to interfere and received a slap on her face and a kick to her abdomen from Nhi.

The attackers were eventually arrested when airport security was reinforced by police from Tho Xuan District.

The incident was caught on CCTV and the footage later went viral on social media.

Many viewers believed that the security officers at the scene were rather slow and passive as they were unable to prevent the violence from escalating.

The Civil Aviation Authority of Vietnam previously announced they had imposed a 12-month flight ban upon the three men.

The police unit in Tho Xuan confirmed on November 25 they had initiated legal proceedings against the men for “disturbing public order.”