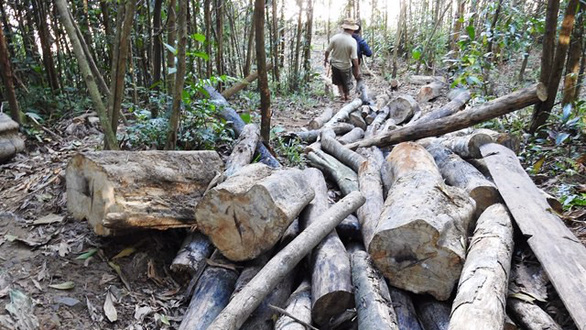 A number of trees have been cut down in a forest though to be strictly safeguarded against environmental destruction in central Vietnam, yet local authorities seem to be unable to identify any specific instances of illegal logging.

After receiving reports from residents claiming their trees had been chopped and timber had been stolen, Tuoi Tre (Youth) newspaper journalists made their own journey through a 324 hectares forest in Tra Doc Commune in Bac Tra My District, Quang Nam – a province notorious for its lax forest oversight.

Only stumps ranging from .5 to 1 meter long remained in large sections of the forest that sit just under 100 meters away from an under-construction mountain road.

In the past, several types of trees, including threatened species such as erythrophleum fordii, madhuca pasquieri, and bullet wood shaded the forest.

A local man said the illegal logging started many years ago and has become increasingly frequent since the construction of the mountain road, Truong Son Dong, began several months ago.

“They even cut down trees in broad daylight. We could only stand and took pictures from far away. We were scared to get close in case they decided to attack us,” the man said.

Along a trail leading to the forest were obvious traces that locals said were left by water buffalos used to pull the logs.

The path comes to an end at a denuded hill.

A stump with a circumference as large as the stretched arms of five adults lay there, freshly cut.

Dozens of burned, smaller trees and a few logs that must have been discarded due to their ill form also lay at the bottom of the hill.

The scale of destruction grew larger as one moved further into the center of the forest, raising the question: “How has such massive scale illegal logging gone unnoticed?”

Forest protection duties in the area are expected to be carried out by rangers and the local community groups whose members are paid VND300,000-400,000 ($13-17) a year by the government, according to Ho Van Loi – chairman of the administration in Tra Doc Commune.

Loi said the people in charge do patrol the forest but have never received reports of illegal logging, which the government deems inviolable.

The official believed it was the rangers and community-based groups who are responsible for the forest damage.

But Le Van Truong, head of forest management the Bac Tra My District, where the forest is located, said that protecting the local environment is the Tra Doc Commune administration’s duty and his rangers only play an assisting role.

Truong stressed that his department discovered 112 cases of illegal logging and seized 104 cubic meters of wood in the district since the beginning of this year but no such cases have been found or reported in Tra Doc Commune.