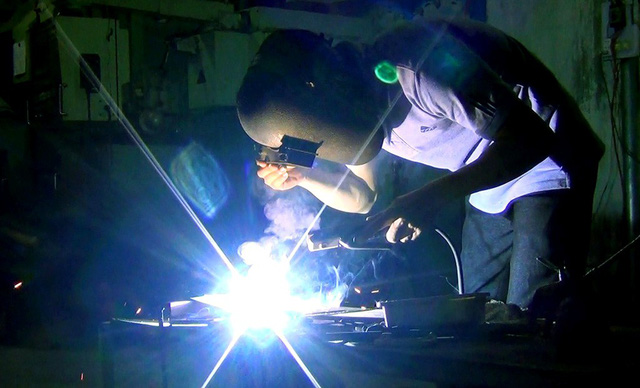 A recent deadly fire at a diner in the southern Vietnamese province of Dong Nai has once again rung the alarm bell on imminent fire and explosion hazards posed by careless welding activities across the country.

The restaurant owner had a team of welders repair and upgrade some areas of the building prior to the tragedy that killed himself and six workers.

A police investigation later stated that sparks from the welding activities had triggered the fire.

In late March, a wood processing facility in District 12, Ho Chi Minh City caught fire as a welder was doing his job.

A more serious accident occurred at a confectionery facility in Hanoi in July 2017, killing eight people and wounding two others. In early 2016, 13 people died as a blaze burned down a karaoke bar in the capital.

Careless welding activities were the reason behind the two fatal fires in Hanoi.

In the wake of the Ruby fire, Tuoi Tre (Youth) newspaper reporters have paid a visit to multiple welding shops across Ho Chi Minh City and Dong Nai to have a closer look at the dangerous activities.

The correspondents first arrived at a location on National Highway 13 in Thu Duc District, Ho Chi Minh City, whose owner is N.T. Danh, a welder with seven years of experience.

“I studied welding at a vocational school and started working for several firms to save enough money to open this shop,” Danh stated.

The owner said he often reminds his employees to keep flammable objects as out of reach as possible and to always wear protective gear and check the wires and circuits of their tools.

“The most important thing is to follow all the basic safety rules, which helps minimize the hazards,” he remarked.

H.T.P., who owns a welding facility on National Highway 1 in Thu Duc, said he started his career as an amateur.

“It’s a very difficult job. Welding rods can get as hot as 2,000 degrees Celsius and the sparks are extremely hot,” P. stated.

The man admitted his shop lacks proper firefighting devices, adding that a welder’s caution matters most.

Likewise, many welding shops in Dong Nai do not meet safety standards, according to the Tuoi Tre reporters’ observation.

Some of the facilities are too small and many employees do not have enough protective gear.

According to Duong Duc Thinh, who previously worked at Vinashin Nhon Trach, a shipbuilding firm in Dong Nai, many welders started their job as amateurs and are not equipped with a basic knowledge of the profession.

“They are supposed to thoroughly clean and prepare the area and protect themselves when performing the job,” Thinh said.

Hoang Danh Do, a welder with eight years of experience, added that many employees do not pay enough attention to fire and explosion hazards.

“Welders at medium and small facilities are not trained to respond to fire, which only exacerbates the situation if a blaze does occur,” a representative from the Ho Chi Minh City fire department assessed.