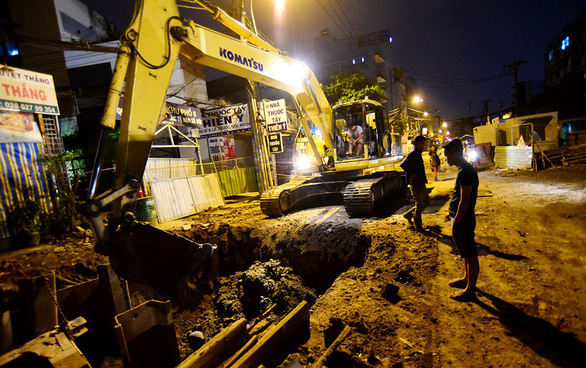 Currently, most projects to install underground cables and pipes by power, water and telecom utilities in the southern metropolis are done using open-cut methods.

This often leaves crucial roads blocked for long periods of time, and road surfaces are rarely returned to their previous state after works are done.

In the first 11 months of 2018, inspectors from the municipal transport department booked 792 cases of contractors failing to adequately restore road surfaces after underground works, collectively fining them more than VND4.72 billion (US$202,000).

The transport department already has plans to settle the issue next year.

Open-cut methods will no longer be allowed on 88 roads that either have high traffic volume, travel through public space, or contribute to the urban appeal of Ho Chi Minh City from next year, according to Vo Khanh Hung, deputy director of the municipal transport department.

Instead, underground works on these roads will be required to be carried out using one of the three no-dig methods of horizontal directional digging (HDD), pipe jacking, or using a tunnel boring machine (TBM).

Works including the laying of underground power lines, telecom cables and installing drainage and water supply systems will be subject to the new regulation.

HDD uses a drilling machine to bore an underground hole underneath a stretch of road, through which a polymer conduit is pulled.

Cables are pulled through the conduit without disturbing traffic above.

Meanwhile, pipe jacking uses a hydraulic pipe jacking machine to push a large steel pipe through to the other end, before excavated soil is removed from within the pipe.

This method offers the least disruption and the highest physical protection and ease of maintenance but is also the most expensive in terms of construction costs.

The use of TBM is most popularly seen in the construction of underground tunnels for Ho Chi Minh City’s metro lines, and is most suitable for projects that require huge tunnels.

“The transport department is welcoming feedback from contractors to see what difficulties they may face in reality [when carrying out no-dig methods],” Hung said.