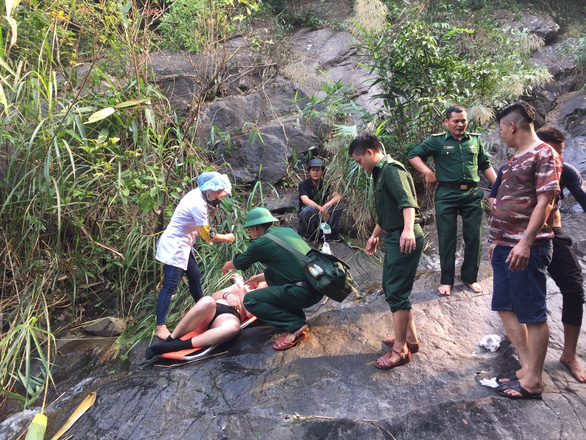 Officers from a local border guard station in the central province of Thua Thien-Hue on Friday rescued a young British tourist, who suffered a serious injury after he slipped during a waterfall swim the same day.

The victim, identified as 19-year-old Christian Allwyn Hawitt, was receiving treatment at a hospital in the neighboring city of Da Nang, Hoang Van Dung, vice head of the Lang Co Border Guard Station, told the media on Friday evening.

According to the officer, a patrol team of the station was on duty near the waterfall on Hai Van Pass, when they came across a group of three foreign tourists, one of whom appeared to suffer serious injuries.

The border guards immediately called an ambulance and emergency services from Chan May General Hospital, located some 30km away from the waterfall, to the scene of the accident.

The victim was then transferred to Da Nang for further treatment more than one hour after receiving first aid.

According to initial information, the three tourists, all British nationals, were traveling from Hue, the capital of Thua Thien - Hue, to Da Nang on rented motorbikes when they decided to stop by the waterfall on Hai Van Pass to take a bath.

Hawitt slipped and fell as he was climbing on the waterfall.