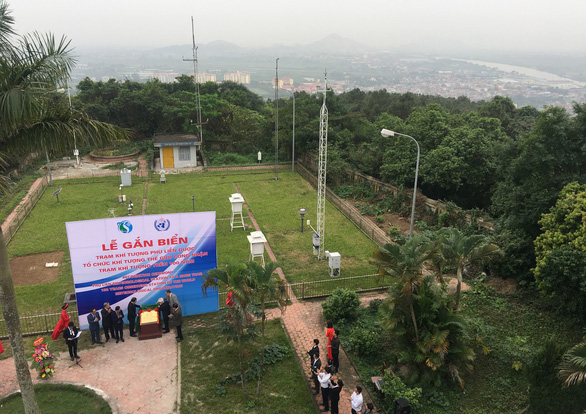 A meteorological station in the northern Vietnamese city of Hai Phong has been listed among the world’s centennial observatory station by the World Meteorological Organization (WMO).

A ceremony was organized on Saturday morning for the WMO to recognize the 117-year-old Phu Lien meteorological facility, located in Kien An District, Hai Phong, as the world’s centennial observatory station.

The acknowledgement was granted after the facility met a number of criteria listed by the WMO, including being at least 100 years old, having provided continuous data for a century or more, and operating in line with the organization’s standards, among others.

Phu Lien is the weather station that has the longest history in Vietnam, according to Professor Nguyen Duc Ngu, 82, who is a former weather observer at the facility and was head of the Vietnam Meteorological and Hydrological Administration between 1991 and 1999.

The establishment was constructed on September 16, 1902, Prof. Ngu said, adding that the station was originally equipped with only meteorological magnetic field monitoring equipment.

The station used to provide data for Vietnam, Laos, and Cambodia, the professor elaborated.

Tran Hong Thai, the incumbent head of the Meteorological and Hydrological Administration, asserted that the Phu Lien station still plays an important role in monitoring weather conditions, providing forecasts, and minimizing damage brought about by natural disasters in the country’s northeast region.

According to the WMO, there are about 100 centennial observatory stations across the world, all of which need to be preserved for their data.

Such information is essential for experts to evaluate the changes of climatic patterns over the past century.

The WMO is a specialized agency of the United Nations with 192 member states and territories.