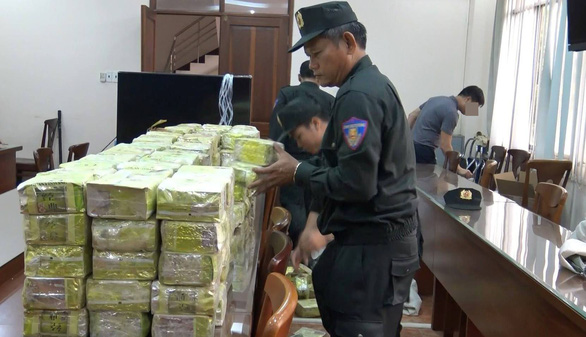 Police in Vietnam have captured the Chinese man allegedly behind a large-scale illegal ring that was caught transporting and trading about 576 kilograms of drugs last week.

The anti-drug division under the Ministry of Public Security on Thursday apprehended Wu He Shan, 57, from Fujian, China, to verify his role as leader of the illicit drug ring.

The ring members claimed that the drugs, worth approximately VND600 billion (US$25.8 million), were bound for Taiwan.

On March 24, police extended their investigation and coordinated with their Filipino counterparts to seize another 276 kilograms of drugs in Manila, which the same ring had previously shipped from Cat Lai Port in the southern Vietnamese metropolis.

The Ministry of Public Security on Tuesday initiated legal proceedings against four of the 11 arrested suspects, including 52-year-old Chinese national Huang Zai Wen, and Vietnamese citizens Thao A Do, 37, Thao No Pao, 45, and Ly A Vua, 32.

All four of the suspects are considered key members of the ring.

In their statements, the suspects claimed that Wu was the leader of the ring and Huang was his right-hand man.

A police investigation also revealed that the narcotics were first smuggled from Laos via the Bo Y Border Gate in Kon Tum Province in Vietnam’s Central Highlands.

After the drugs passed through the border gate, the three Vietnamese members were charged with transporting the shipment to Hashan Company in Binh Tan District, Ho Chi Minh City, where Huang and his subordinates would disguise the stimulants as plastic beads, before shipping them to a third country.