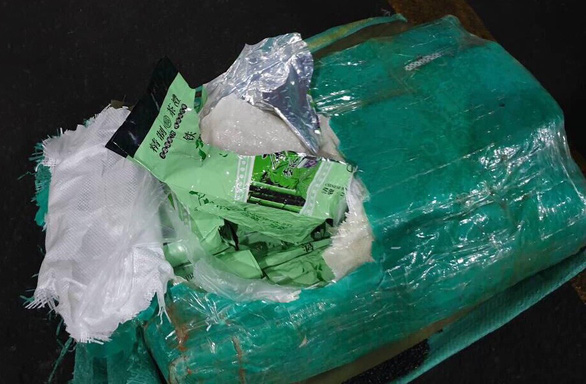 Police in the Philippines, in coordination with their Vietnamese couterparts, have recently seized 276 kilograms of crystal meth originating from a port in Ho Chi Minh City.

Eight of the suspects are Chinese nationals while three others are Vietnamese.

Following their arrest, the ring members confessed to police that another drug haul had been transported to the Philippines via Cat Lai Port, before Vietnamese officers informed their Filipino counterparts of the tip-off.

On Saturday evening, the Philippine Drug Enforcement Agency (PDEA) and customs department eventually discovered that the drugs were hidden inside a container, which were declared as plastic beads, at a port in Manila.

Police investigation revealed that the narcotics were first smuggled from Laos via the Bo Y Border Gate in Kon Tum Province in Vietnam’s Central Highlands.

After the drugs passed the border gate, the three Vietnamese suspects in the ring were in charge of transporting them to Hashan Company in Binh Tan District, Ho Chi Minh City, where a group of Chinese members led by 50-year-old Huang Zai Wen would disguise the stimulants as plastic beads, before shipping them to a third country.

Hashan is operated by a female Vietnamese director, while its fields of business were registered as garment and export.

Records showed that the firm had only declared 40 shipments over the past five years.