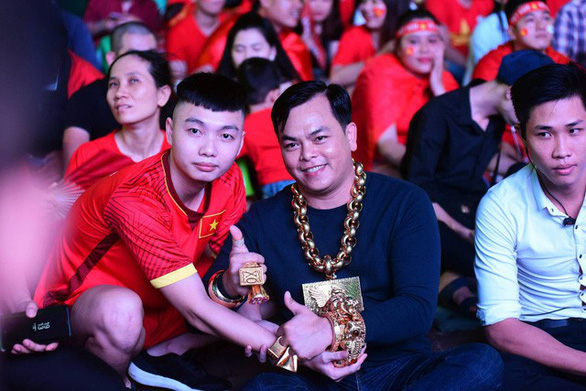 Vietnamese ‘gold man’ summoned by police for alleged drug use

A man who has recently become an Internet sensation after posting photos of himself wearing an obscene amount of gold to social media was summoned on Wednesday by police in Ho Chi Minh City, following their raid on his karaoke bar that caught many customers doing drugs.

Tran Ngoc Phuc, 36, a.k.a. Phuc XO, a resident of District 12, was required to come the police station to assist an investigation.

Phuc is the owner of the XO Karaoke bar on Truong Chinh Street in District 12.

A team of officers swooped on the venue on Tuesday night and discovered that many customers appeared to be high on drugs.

Drug testing of 100 people present at the venue showed that 39 were under the influence of narcotics.

A comprehensive search was also conducted at the karaoke bar that evening to further assist police in their investigation.

Phuc XO’s claim to fame is the large amount of gold he wears, which is the subject of many videos and photos he has posted to social media.

He has also been seen with multiple gold-plated high-capacity motorbikes and an automobile covered in gold.

The man recently attracted media attention after wearing a custom-made golden cap with an estimated value of more than VND1.8 billion (US$77,400).