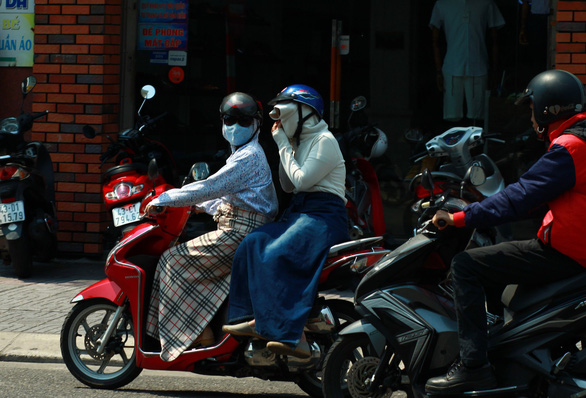 The scorching weather that has been baking Ho Chi Minh City for weeks is forecast to intensify over the next days with a high of 38 degrees Celsius, while the UV index in the metropolis will also remain at a dangerous level.

The heat is expected to blanket southern Vietnam, including Ho Chi Minh City, until the end of this week, according to the southern hydro-meteorological station.

Statistics from Weather Online, a British weather website, showed that UV Index in the southern metropolis reached 12 on Monday.

Such a high and harmful level of UV is forecast to linger until Thursday.

According to the World Health Organization, an UV index higher than 11 means extreme risk of harm from direct sun exposure, as unprotected skin and eyes can burn after only ten minutes.

It is advisable that people try to avoid sun exposure between 10:00 am and 4:00 pm, said Dr. Le Duc Tho, a Ho Chi Minh City-based dermatologist.

Parents must pay extra attention to their children as they are more vulnerable to the sun than adults.

Staying hydrated is a must in this type of weather.

The heat is also expected to affect central and northern provinces this week, the National Center for Hydro-meteorological Forecasting reported.

Average highs in Hanoi will be 35 to 37 degrees Celsius.

The northern province of Son La will experience the highest temperature, which is above 40 degrees Celsius.